On Aug. 4, 1993, Denis St-Onge, then the president of The Royal Canadian Geographical Society, and Gilbert Grosvenor, then the president of the National Geographic Society, met in Halifax to launch a groundbreaking joint initiative to strengthen geographic education in Canada. The new program, to be administered by the Canadian Council for Geographic Education, was the result of a special RCGS task force that had been working for months to bring the idea to fruition. [Read the story from the Nov/Dec 1993 issue of Canadian Geographic here]

Funding The Society’s education program for elementary and secondary schools in Canada was funded through an initial endowment based on equal investments of the National Geographic Education Foundation (NGEF) and the RCGS of $150,000 each. The foresight of the leadership of the societies 22 years ago continues to pay dividends to this day, providing stable annual funding in support of geographic education in Canada.

From its inception, the Canadian Council for Geographic Education (now Can Geo Education) set out to offer a uniquely Canadian geography education program while at the same time taking advantage of what was working in the United States. One example is the Canadian Geographic Challenge, Canada’s premier competition for geography students, which recently celebrated its 20th year by bringing 20 students to Ottawa for the national championship. The live final was made possible because of a National Geographic Education Foundation (NGEF) grant based on a donation from Alex Trebek, who has long been associated with the CG Challenge, National Geographic’s GeoBee Challenge and the National Geographic World Championships. Giant floor maps Similar to the Can Geo Challenge, National Geographic’s travelling maps inspired the RCGS’s giant floor maps program. There are, however, significant differences that reflect the “Made in Canada” approach. For example, the themes of the giant maps reflect Canadian interests and priorities such as the Arctic, space technology, energy and the boreal forest. Furthermore, the giant floor map program mirrors all CG Education’s educator resources in that it is bilingual and offered free of charge — points of principle and pride. The popularity of the giant floor maps has driven membership in CG Education to the point where it will surpass 15,000 educators this fall. This may be exactly what members of the Society at the Halifax meeting had in mind when they set out to improve geographic literacy in Canada. They knew that “a sound understanding of people and places, and the relationships between them, is essential to making sense out of our world.” They also recognized that there is strength in partnership, and the commitment to collaboration with National Geographic continues to this day. New projects For example, the NGEF-supported OPEN Water project brings together CG Education and the geographic alliances of Minnesota and North Dakota. Focused on the transboundary Lake Winnipeg Watershed, OPEN Water combines land-based knowledge, geospatial technology and fieldwork to develop environmental awareness and understanding. Also with NGEF, CG Education is exploring a North American geography competition along the lines of the CG Challenge and the GeoBee Challenge. And both organizations are committed to expanding the participation of geography students in citizen science through BioBlitzes in national parks beginning in 2015. More than two decades ago, two societies representing two countries came together to serve one goal: the enhancement of geographic education in elementary and secondary schools. Since then they have developed separate programs that reflect and serve their respective audiences. Plans to celebrate the 25th anniversary of CG Education in Halifax in 2018 will undoubtedly acknowledge the significance of the meeting in 1993, and will celebrate the strengthening of geographic education in Canada as a result of the abiding partnership. 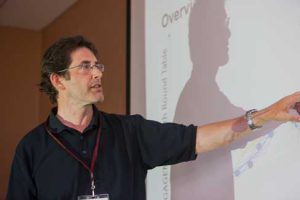