This week, Orlando’s SeaWorld theme park announced that Tilikum, one of its seven captive killer whales, is critically ill. The news has reignited a passionate debate over whether aquariums and parks are justified in keeping whales and other cetaceans in captivity, either for research or entertainment purposes.

Tilikum, the subject of the controversial 2013 documentary Blackfish, has become a mascot for those who believe that the capture of marine mammals should end and that existing captive whales be transferred to sanctuaries.

Captured near Iceland in 1983, Tilikum lived and performed for seven years at Sealand of the Pacific in Victoria, B.C. In 1991, Sealand trainer Keltie Byrne fell into the orca enclosure and drowned after being pulled to the bottom by Tilikum and tossed between his two tank mates, Haida and Nootka. Shortly thereafter, Sealand closed and sold its whales to SeaWorld Orlando (where, 19 years later, Tilikum would kill another trainer, Dawn Brancheau).

At an inquest into Byrne’s death, whale expert Paul Spong testified that the whales’ uncharacteristic behaviour was almost certainly the result of their confinement in an environment of “extreme sensory deprivation.”

Byrne’s death and the resulting public outcry were explored in a story by Bruce Obee in the January/February 1992 issue of Canadian Geographic. Captive whales provide ample opportunity for scientific research, Obee wrote, and can be a powerful way to educate children about the importance of saving marine mammals in the wild. Books and films provide some insight, but nothing compares to seeing a killer whale in the flesh, a Vancouver Aquarium educator told Obee at the time.

(Since 1996, the Vancouver Aquarium has only accepted whales, dolphins and porpoises that were born in captivity or rescued and deemed unsuitable for release. The last live-capture permit for a killer whale was issued in Canada in 1983 but never fulfilled, and orcas are now protected under the Species At Risk Act.)

“It teaches them that it’s okay for us to imprison whales just for our amusement,” Hamilton said.

Obee arrived at his own conclusion on a whale-watching trip after seeing members of J-Pod, a family of southern resident killer whales, playing in the waters off San Juan Island.

“While my pragmatic side appreciates the value of captive whales, my emotions say it’s wrong,” he wrote. “These orcas are not fish, they are mammals with families, much like ours. We have the ability to separate them, but do we have the right?”

A Senate bill that would make it illegal to keep cetaceans in captivity in Canada received second reading in January and is expected to be debated this summer. 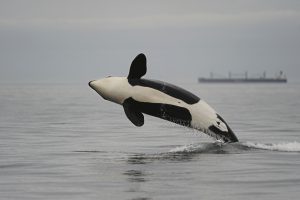 In the 1990s, an abrupt decline in the fish-eating southern resident population dropped to 75 whales from 98