The rise of the urban coyote

It sounds preposterous, but Stan Gehrt and his team at The Cook County Coyote Project found that as many as four to five coyotes are nestled within every square kilometre of the greater urban Chicago area.

Though not native to any part of Canada or the eastern side of the United States, coyotes have managed to become wily multipliers in these areas, doubling their range and adapting to the new urban environments in which they are now settled.

“Once coyotes get established in an urban setting, they typically do very well,” Gehrt said at a recent Wildlife Speaker Series that took place in Ottawa.

Urban survival rates for coyotes are surprisingly higher than rural coyotes, with an average life span of about 12 years. With an average of only 0.5 coyotes per rural square kilometre, coyotes are also more densely populated in urban settings.

Researchers have studied the various innocuous ways coyotes wander into urban settings, navigate traffic and learn coping regimes without being discovered by people. Gehrt estimates that only about four per cent of coyotes becoming “nuisance” animals and have to be removed.

City dwellers needn’t fear a coyote invasion though. Gehrt’s team found coyotes treat humans with trepidation. Coming out mostly at night, coyotes do not generally interact with people, even though they may live within metres from homes.

While coyotes may not effect people much, humans have a great influence on them. Currently, cars and shootings are the two most common causes of death for the urban coyote. 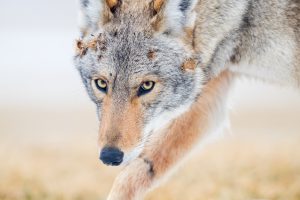 Conflicts with wildlife in Canada continues to be an issue, but there are ways to keep yourself and wildlife safe