The hunt for the Franklin ships: Point of abandonment

ROBIN RONDEAU, A MARINE archeologist with an interest in the Franklin story, points to what he sees as a critical detail in the enduring mystery around the fate of the ships. “The fact that so little ship’s debris has been encountered,” he wrote in 2010, “suggests that both Erebus and Terror were intact when they sank, and were likely [to] remain that way on the bottom.”

Rondeau’s conclusion is that the ships sank roughly where they were last reported by their crew, in Larsen Sound — an area that has not been systematically surveyed because of extremely inhospitable conditions. Jim Balsillie agrees. “The one place we’ve never searched is the point of abandonment.”

On ships such as the Erebus and Terror, Balsillie observes, sailors would be constantly applying tar to the hull interior to stop leaks. But after two years stuck in thick ice, and with many crew members ill, such upkeep may have fallen by the wayside, leaving the hull vulnerable. “My guess is that the moment the ice let go, at least one of these vessels dropped like a stone.”

In 2013, a further piece of evidence surfaced, suggesting that one of the ships may have sunk in this area. An Inuit man had found, back in 1954, a heavy plank on the west coast of King William Island, just to the north of the location of several graves and “Boat Place,” where many other Franklin expedition artifacts were found.

The weather-worn pine plank found its way into a federal government collection, and was recently rediscovered by Karen Ryan, an Arctic archeologist at the Canadian Museum of History. After comparing the plank to diagrams of the ships, she concluded it likely came from either the Erebus or the Terror, and not one of the less sturdy whaling vessels that sometimes sailed in the region. The spike, she says, is long enough to extend through two planks, reflecting the fact that the ships were double-decked. It is the only fragment of a vessel of the vintage and design of the Erebus and Terror to have washed up near the point of abandonment.

If the Franklin ships had sunk in the vicinity of the area where they were abandoned, they may have broken apart or been crushed by thick ice floes, leaving a debris field and wreckage that washed up on shore. Yet this explanation holds if only one of the vessels went down in Larsen Sound or Victoria Strait. After all, several Inuit eyewitnesses told Franklin search parties in the late 19th century that they’d boarded a beset vessel, with masts and a cabin, well to the south of Victory Point.

IN AUGUST, THE PARKS CANADA search team, led by marine archeologist Ryan Harris, will be heading north for the first time to Larsen Sound and the Victoria Strait area off the coast of King William Island where the ships were last seen. As in 2012 and 2013, the expedition will have a dedicated ship, the Arctic Research Foundation’s Martin Bergmann, as well as the use of a high-tech underwater sonar device and logistical support from the Canadian Coast Guard, the Royal Canadian Navy and One Ocean Expeditions, which, in partnership with The Royal Canadian Geographical Society, will be providing a vessel, the One Ocean Voyager, for the search. The W. Garfield Weston Foundation, Shell Canada and the Arctic Research Foundation have likewise partnered with the RCGS.

“There’s a lot of hardware going up this summer,” says Balsillie, noting that the extra ships allow the search teams to cover more remote terrain, and do so more comprehensively than they’ve been able to do in the past. The goal, he adds, is to fit more pieces into the jigsaw puzzle. “I’m far from anything but optimistic.” 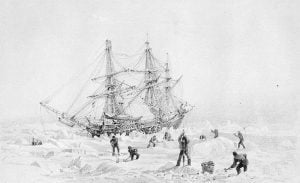