Shortly before astronaut Chris Hadfield ended his five-month space mission in May, a British newspaper used an unlikely term to describe his work: “troubadour.” The term recalls a time when wandering medieval minstrels arrived at European courts, singing about love and chivalry and other themes of the day. Hadfield’s reach was far greater, however. He sent messages heard all over the world from space.

The magic came through social media platforms such as Facebook, Twitter and YouTube. Hadfield, the first Canadian commander of the International Space Station, had 21 years of experience before his recent mission, but had also previously moonlighted as a guitar player. He used every tool these disparate jobs taught him to engage his audience.

There was humour: “Okay, we’ve got one tortilla,” Hadfield said in a video demonstrating how to make a peanut butter sandwich in space. His hand accidentally bumped the tortilla, pushing the food off screen. “Oh, got away!” he cried.

There was poetic description: “Polka-dot desert — centrepoint irrigation farms in Egypt. A life necessity viewed from a stellar vantage point,” Hadfield wrote in a Twitter picture caption in January.

Most importantly, however, Hadfield and the Canadian Space Agency involved people in his mission: he played a live concert that had thousands of schoolchildren singing along, and he participated virtually in an event at the agency’s headquarters that included a call from Star Trek’s William Shatner.

Most Canadian astronauts — indeed, most astronauts in general — fade into public obscurity after they launch into space. They toil almost unnoticed, sometimes popping into view during a press conference or a spacewalk. Hadfield’s mission broke that mould.

It helped that Hadfield is an engaging personality, but he remains humble when asked if he felt famous while he was amassing hundreds of thousands of social media followers in space. “I am just a member of the team here,” he said in French during a January press conference, but added that the difference is “we have technology that is more capable [than before] right now to communicate what we do here during space exploration.”

Hadfield also had an army of assistants. Among them was his son, Evan Hadfield, who was his father’s social media manager from Earth. Additionally, the Canadian Space Agency “worked day and night for years to make this happen,” as Hadfield said in a press conference after he landed.

On top of managing publicity during the mission, the agency ran two public contests. One competition encouraged Canadians to pose with a 2D cut-out of Hadfield; the winning photo showed the Canadian spaceman’s avatar kissing a cod. The other contest asked students to submit experiment ideas for Hadfield to perform. The result — Hadfield wringing out a washcloth in space — had nearly nine million views on YouTube by early August.

There likely won’t be a space station encore for Canada’s bard of the cosmos. Hadfield retired from government service in June, citing a desire for new horizons. He now spreads the value of space exploration through paid speaking engagements and pro bono events for schools, as well as occasional interviews. “You know, you can’t support the space station if you don’t know it exists. People have to know it exists, and see that it serves us at a lot of different levels,” he told U.S. NPR in July.

Hadfield’s next major project is a book, An Astronaut’s Guide to Life on Earth, published in October. His wide-eyed wonder of space caught the attention of millions while he was off Earth, showcasing the talent that Canada produces — and Canada’s ability to contribute to the wider world. 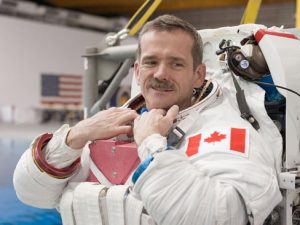