The 49th parallel: Our defining line

Most international borders adhere to some sort of logic. They follow coastlines or rivers, watersheds or natural barriers. They make sense. Not so the 49th parallel.

The border from the Lake of the Woods to the Rockies was set in October 1818, and was later extended all the way to the Pacific Coast. A Procrustean solution that causes more problems than it solves, it plays havoc with water reservoirs and mountain routes along the way, which more naturally fall north and south.

The border should zigzag wildly up and down like an erratic EKG. Instead, it draws its razor-like line stubbornly to the sea. It defies common sense, slicing off a fingertip of land in British Columbia: Point Roberts, Wash., U.S. territory that can only be accessed via Canada.

It disregards older political boundaries as well: those of the First Nations that had their own trade routes, their own cultural and territorial contours in place long before any surveyors showed up. Indeed, not a single Indigenous culture group is wholly contained within Canada’s borders.

The 49th parallel has since become synonymous with the Canadian border as a whole, as a shorthand for that larger political divide between the Manifest Destiny to the south and the muddled patchwork to the north. Between melting pot and mosaic, as it were.

But for the majority of Canadians, the 49th parallel is a northern border. Most of our population lives well below it, would have to drive north to reach it. Only three provincial capitals sit above it. (Victoria dangles below at the southern tip of Vancouver Island by design, not accident. It was a pre-emptive claim by the Hudson’s Bay Company, aimed at blocking the Americans from extending the line across the lower half of Vancouver Island. Fort Victoria helped pin down the western end of our border.)

The Canadian-U.S. border is often heralded as the longest undefended land border in the world. Perhaps. But not uncontested. Our border was born of threats and counter-threats, of sabre-rattling brinkmanship and political chess moves. And any border, even an arbitrary one, shapes us. We grow into our borders, whether we like it or not.

I first reached the 49th parallel as a teenager, during a road trip with my father through Saskatchewan, south of Estevan. We came to a large emptiness marked by competing flags: Canadian on one side, American on the other.

With the confidence that comes with youth, I declared that I didn’t believe in borders. They “weren’t real.” My dad nodded, then gestured to the open landscape.  “Well, if you think it’s imaginary, try walking across that field, see what happens.”

I never took him up on his offer, because I knew that no matter how much I wanted to deny it, borders are real. They matter. So here’s to 200 years of defying geography, topography, common sense and Manifest Destiny. Here’s to the 49th parallel.

This story first appeared in the September/October 2018 issue of Canadian Geographic.
Advertisement
canada 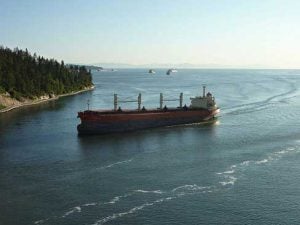