Weather trumps all in the Arctic, including Parks Canada’s early search efforts on the 2014 Victoria Strait Expedition. This summer’s search for the wrecks Sir John Franklin’s ships plans to comb two distinct areas. Work at the first — an area to the south of King William Island that has been searched several times in recent years and home to some of the sites believed by some most likely to yield a find this summer — was slated to begin August 10, but it has so far faced numerous challenges.

Working from the Arctic Research Foundation’s vessel Martin Bergmann, the search team was forced to delay the beginning of its hunt by four days when ice in the Queen Maud Gulf prevented passage to the area.

When August 14 rolled around, Parks Canada’s underwater archaeologists Ryan Harris and Jonathan Moore arrived in Cambridge Bay (the starting point for their voyage) as planned, but their gear didn’t. Sent weeks earlier by air freight, mechanical problems held up crates of Parks Canada’s sonar equipment that are critical to the search at the airport in Kugluktuk. The equipment eventually arrived two days later, on August 16.

With the clock ticking, the archaeologists and crew immediately set to getting the gear in place, and within hours were ready to leave port, but the weather again intervened.

Beyond the calm of Cambridge Bay’s placid harbour, icy three-metre waves were tossing anything that would float around the Arctic Ocean. The ship’s hull creaked and moaned from the pressure as it was battered by the swell. A headwind slowed the ship to a mere two knots. With a forecast for more of the same weather in the coming days crackling over the marine radio and nowhere for the Bergmann to hide, captain Darryl Clow deemed it safest to return to port, and delay the search until the seas calm.

“After six years of doing these searches, you just accept delays caused by the weather,” says Parks Canada’s Harris. “There are so many things that are within your control to take care of, you don’t worry about the things that are beyond it. If it was a mechanical problem with our equipment that I could have foreseen and be prepared for, I’d be upset about the delay, but there’s nothing you can do about the weather.” 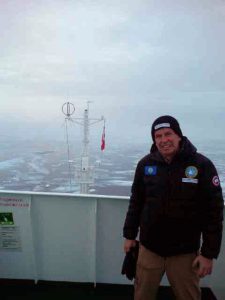