Resurgence of the peregrine falcon

The fastest animal in the world almost ran out of time in Canada, but a chemical ban helped bring them back to our skies
By Marika McKenzie
Advertisement

PEREGRINE FALCON
Falco peregrinus anatum SARA status: Special concern
Appearance: Blue-grey upperparts with whitish underparts, barred on the sides, belly and legs; darker “hood” and sideburns; Long, pointed wings
Weight: 530 to 1600 grams
Wingspan: 100 to 110 centimetres
Length: 36 to 59 centimetres
Offspring: 2 to 5 eggs yearly
Lifespan: 4 to 5 years, but have been seen to live up to 20

A testament to its resourcefulness, the peregrine falcon will dig its nests into the nooks and crannies of skyscrapers and bridge towers. Thankfully, these nests — of which there are now hundreds in Canada — are full of healthy eggs.

Go back 60 years, however, and the shells would have cracked under the weight of their 900-gram parent. From the 1950s to the 1970s, peregrine falcons experienced a major decline as a result of strange breeding behaviour, poor eggshell formation and a low hatching success. Scientists blamed the widespread use of pesticides, such as DDT, as the culprit.

A predatory species, peregrines feed mainly on other birds that eat grain or insects treated with pesticides. Through the process known as bioaccumulation — in which toxins build up as they transfer from species to species up the food chain — the falcons were exposed to chemical concentrations many times higher than those in their prey. By 1975, there were only 35 nesting pairs left in Canada, and the species had completely disappeared east of Alberta.

Following international bans on DDT use in the early 1970s, the species began to bounce back. In 1978, when the peregrine falcon was designated as endangered by Canada’s new Committee on the Status of Endangered Wildlife in Canada, captive breeding and reintroduction programs were initiated. Thanks to these efforts, both COSEWIC and Canada’s Species at Risk Act now list the bird as a species of special concern.

Today there are more than 800 nesting pairs of the crow-sized falcons in Canada, with 7,000 pairs thought to be breeding throughout North America. 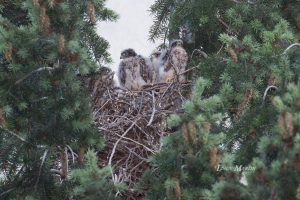 Nearly 40 years after it was first put on a list of threatened species in Canada, the peregrine falcon now looks set to be classified as not at risk