The final countdown is on for the 2017 Shell Eco-marathon Americas, taking place in Detroit, Michigan from April 27-30. Marc-André Caron, a third year mechanical engineering student at the University of Ottawa, is the team captain of Supermileage uOttawa, who are competing in the gasoline prototype category with their vehicle JAWS. We talked to Caron to get a behind-the-scenes look at how teams prepare for the competition.

How do you approach the competition?

First, we figure out what is the goal of the team. If it’s the first year that you go to competition, usually just building a car is a big enough challenge. The second year, it’s probably to pass tech inspection and have a ranking. Last year, when we got to the marathon the first day, the car wasn’t even running. We had all the electronics to put in the car to make the engine start, and we just passed tech, right on the limit. The third year is when you get competitive — so this year, that’s our goal.

What are the biggest challenges you face as you prepare for the competition?

I think one of the biggest challenges is managing your time between school, your social life and the team. One of the most important factors in being on a team like this is that you need to get your social needs from the team; you need to be friendly with everyone. Right now, we have twelve members from last year and fourteen recruits. When we get new members, we don’t know exactly how much time they are going to dedicate to the team. In the end, the people that show up and show interest are going to be the ones that stick around and become real members.

What goes into designing the vehicle?

It’s an engineering competition, not a building competition. You want to design for as long as possible and build for as little time as possible. We do the design work, then we 3D print it to make sure that everything’s going to fit, and then we machine it. In a perfect world, we’ll design for maybe ten months, then do one month of building and one month of testing so we can rebuild if something breaks or if something could be better. There are so many options when you design an engine. Being on a team like this gives us the opportunity to really try out the ideas that we have.

How much of the vehicle ends up being custom-built?

One very important thing about our team is that we build almost everything ourselves. We have a CNC [Computer Numerical Control, a computer-controlled cutting machine used to make complex parts — Ed.] here and most of the team members have to learn how to use it. When we compete against American universities, we find they have so much budget to just focus on design and then send everything out to have the parts made. For us, we do the design and then we also build it. I think we learn more, but it’s also so much harder. We are starting to get business students to help with finding sponsorship for the team; I think that’s going to make a big change.

What makes your vehicle stand out?

One big difference that we have is that our vehicle is higher off the ground. It’s an advantage and a disadvantage. It can be a disadvantage because our centre of gravity is higher, so that when we go around a corner the vehicle is not very stable. Last year, we flipped the car three times — but at least we know that our safety features are working well! But the advantage of a higher centre of gravity is when we go to a track where there’s a lot of wind, we designed the aerodynamics of the car to be better in crosswinds. If the wind comes from the side, it’s going to go over the car and under the car, and we don’t have much drag.

What do you think the future holds for transportation and fuel use?

I would like to be convinced right now that it’s going to all switch to electrical, and I think it will in the end, but it’s going to take a lot of time. But during that time I think there’s a lot of technology that can be applied to internal combustion engines to make them more efficient. Our project uses internal combustion, but we also work with the aerodynamics and other aspects of the car to improve its overall efficiency. I would like to go into the automotive industry and concentrate on the environmental aspect of it, like how to augment the fuel efficiency of certain cars. Doing this competition gives us the opportunity to take what we learn in class and apply it to real problems.

This article was created and published with the financial support of Shell Canada Limited.
Advertisement
energy shell cars technology 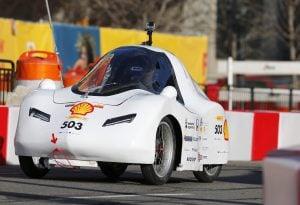 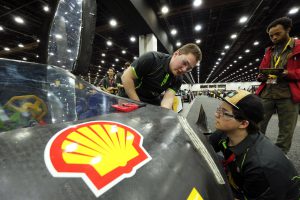 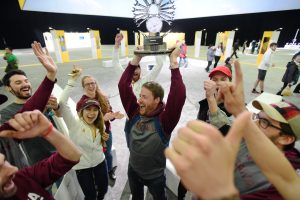