As if the COVID-19 pandemic wasn’t enough, now the insect world is throwing ‘murder hornets’ at North Americans, including in British Columbia.

First spotted in Canada in September 2019 in Nanaimo, B.C., Asian giant hornets nest in the ground and feed only on insects, but may sting humans if their nests are disturbed. The hornets, spotted this year in Washington State close to the Canadian border, can be up to five centimetres in length and are considered an invasive species.

British Columbia officials have asked residents along the Canada-U.S. border, from Surrey to Aldergrove, to watch for the giant hornets this year.

According to experts from Western University, the so-called ‘murder hornets’ likely found their way to Canada and the U.S. through global trade — similar to how the emerald ash borer spread.

“Honey bees have a lot of natural enemies. Bacteria, fungus, mites attack them and pose serious threats,” explains Thompson. “And we humans don’t do them any favours either by exposing them to lots of different chemicals and pesticides. So even though the Asian giant hornet … would just be entering the bottom of the list of what’s currently threatening honey bees, it’s now on the list nonetheless.”

Brent Sinclair, also a biology professor at Western, says if the hornets get into a honey bee hive they will systematically eat their way through the population of the hive.

Honey bee expert Rob Currie from the University of Manitoba adds the invasive species is fairly concerning for the honey bee industry.

“These hornets are quite devastating to the species of honey bee we have in North America,” says Currie, department head of entomology. “In Asia, the honey bees there swarm and attack the hornet, but our European bees don’t have the same defense.”

According to Currie, the “slaughter phase” of the hornet’s life cycle occurs near the end of the year — August or September — and involves the hornet attacking the colony and throwing dead worker bees out near the entrance.

While the re-appearance of the murder hornet in North America is concerning, Currie says their population isn’t yet at a catastrophic level.

“The level where the hornets are at now, they’re not able to decimate whole farms. The number of colonies that would succumb would depend on the numbers of the hornet population,” he says. “It’s difficult to predict.”

To prevent the hornets from attacking honey bee hives, officials are hoping to destroy the hornet nests as the insects come out of their overwintering phase.

“They don’t really know how many nests, if any, are established in the areas where they’ve been sighted. They’ll see how many queens have potentially survived the winter,” says Currie. “There’s a very high mortality associated with queens overwintering. The hope is that most or all of these won’t be able to survive the winter.”

Once spotted, one technique of tracking and destroying the nests is called “beelining.” This involves trapping a hornet at a “base station” and attaching a thread or ribbon of some kind to the hornet. The thread would then allow researchers to be guided back to the nests by the hornet — but leave this to the experts and don’t try the trapping tactic yourself.

Currie says a challenge with trapping and tracking the hornets is the size of their stingers. A traditional honey bee’s stinger is about three millimetres long. The Asian giant hornet’s stinger is closer to six millimetres — long enough to pierce a standard beekeeping suit.

While stings are painful, Sinclair says death from the sting of an Asian giant hornet is rare.

“My understanding is death is not very common. Certainly when I was in China studying with bee researchers, no one discussed them as being dangerous in that sense,” says Sinclair. “However, the risk is there.” 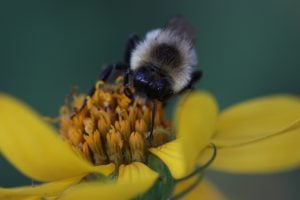 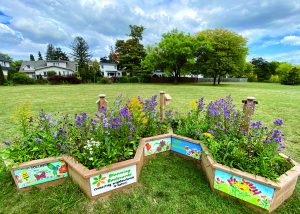 All about bees: Common misconceptions, helping pollinators and how to actually ‘save the bees’

A Garden for the Rusty-Patched Bumblebee: Creating Habitat Gardens for Native Pollinators is an inspiring and practical guide that will help gardeners create habitats full of life and learn about what is needed to take action to support and protect pollinators