Mist-shrouded peaks and macchiatos: A summer sojourn in the Alps

In the French and Italian Alps, you can stay in mountain huts where cappuccino is served and a band plays “Strawberry Fields Forever,” singing in broken English with an Italian accent.

On the trails, you pass ancient stone houses — cow herder dwellings, still used today. The alpine slopes, grazed by said cattle, look like inclined putting greens. The peaks that rise above these human oases are so impossibly spiky that they make the Matterhorn look blunt. The French word for them is aiguilles — needles. Some of them are famous names in the history of mountaineering — the Drus, the Grandes Jorasses. And the white bulk of Mont Blanc, at 4,808 metres, lords above them all. Welcome to Europe.

I am here on a brief gig sponsored by Columbia Sportswear. Twenty journalists have come to the Alps to test Columbia’s 2017 line of outdoor gear. The forecast calls for rain, which, considering how many waterproof/breathable items we’re to try out, is desirable, I suppose.

From the Geneva airport, we are bussed to Chamonix, France, about an hour away. Think of Chamonix as a European Banff. It’s expensive, urbane beyond its size and built on mountain recreation. Even in mid-June, skiers wander the main drag with fat boards over their shoulders. Climbers nosh at patio cafés with ropes and helmets affixed to backpacks at their feet. On a high slope overlooking the town, a ratty-looking glacier, clearly in headlong retreat, feeds the channelized Arve River that flows swiftly through the heart of Chamonix.

The environment is wild, but it’s not wilderness in the Canadian sense. The mountains are technically formidable, but each sub-peak has a name, each ridge a storied past. Little wonder that speed climbing originated here, and that many climbers prefer to paraglide off a summit rather than hike down. When a natural environment becomes this well known, it becomes more a sporting arena than a place of exploration.

Our group is divided roughly in two, between hikers like myself and trail runners. I’m a bit bummed to find myself in the “softer” group — the runners go longer and take more interesting routes — but I just don’t enjoy running.

Our first small challenge is the Vertical Kilometre. A steep trail, following the swath of a tramline, switchbacks up 1,000 metres in just under four kilometres. Our guide, Cecille, works for the fabled La Compagnie des Guides de Chamonix. Founded in 1821, it’s the oldest and largest association of its kind in the world. Although it has diversified in recent years, even villagers from down the road used to be unwelcome in this exclusive local club. The record time up the Vertical Kilometre is about 34 minutes. Cecille keeps a fairly torrid pace.

Our group comes from various countries and backgrounds: Germany, England, many from the United States and me from Canada. Many are experienced outdoor people, although our group includes two good-natured New York City writers, Roz and Andrew. This is Roz’s third-ever hike.

About half a dozen Columbia employees organize and give information about the products where required. They include the impressive Christelle, from Columbia’s European office, who is fluent in all the Romance languages — French, Italian, Spanish and Portuguese, as well as German and English — and always has a smile on her face.

The Vertical Kilometre is reasonably steep, although some popular day hikes in the Rockies, where I live, are steeper. Toward the top, it becomes more of a tamed scramble or via ferrata than a hike. Stemples in the rock provide foot- or handholds at key moments.

After a little more than an hour, I reach La Bergerie de Plan-Praz restaurant at the top of the Brévent chair lift. The tailing runners have just arrived. The British guys are already quaffing ale. Here at 2,000 metres, heavy cloud is closing in. It begins to pour, but I happen to be outside when the clouds briefly part and reveal the giant snowy hulk of Mont Blanc, soaring above the 3,000-metre peaks in the foreground. The glimpse lasts mere seconds, before rain and thick stratus enshroud our alpine world for the rest of the day.

Given the forecast, the organizers have already lavished us with last-minute additions to our cold-weather and rain gear, but the unseasonal snowfields in mid-June prompt a change of plan. Rather than hike up to our mountain refuge for the night, we descend the Vertical Kilometre by cable car and take another lift up the opposite slope, halfway to the famous Aiguille du Midi. A 10-minute hike brings us to a deceptively large mountain chalet overlooking the Chamonix valley where we spend the night.

Advertisement
The elaborate structure atop the Aiguille du Midi in the French Alps resembles a real-life Castle Black from Game of Thrones. (Photo: Jerry Kobalenko)

The following morning, in a steady drizzle, the cable car hoists us to the top of the Aiguille du Midi. At 3,842 metres, it’s the second-highest cable car in the world, scooped only by a newer one in Venezuela. The ascent is eerie. Even the cable supporting our car vanishes in thick cloud, and we seem to be floating in midair. The last few hundred feet feature an almost vertical ascent. The elaborate structure built in the 1950s atop this pillar of granite and ice resembles Castle Black from Game of Thrones.

Corridors of snow and concrete radiate off in various directions, often ending in open metal balconies overlooking a wind-whipped abyss. In many of these, incredibly, groups of mountaineers are strapping on their crampons, about to step or rappel into the void.

Here at almost 4,000 metres, summer doesn’t exist. It’s always winter. Winds and drifting snow scrape the open areas. Visibility improves slightly, and this miracle of engineering, which services half a million visitors a year, becomes even more unbelievable. At this altitude, you feel light-headed.

Even non-climbers such as myself have read of exploits of legendary mountaineers like Louis Lachenal, Gaston Rébuffat and Lionel Terray, who honed their skills in this very spot. I chat in French with a base jumper who flies her wingsuit off the Aiguille du Midi. It’s a very technical jump, she explains: you have to fly through a very narrow slot to avoid the rocks.

Conditions are stable enough for us to take the Vallée Blanche Cable Car into Italy. Each grey, red and white car holds four passengers and traverses the ice field around still-invisible Mont Blanc. For five kilometres and almost 45 minutes, we drift above glaciers, crevasses and granite needles. Far below on this Plutonian ice world, groups of people are everywhere, trekking in neat lines: the Spanish army trains; another group practices crevasse rescue beside a gaping hole; a pack of climbers trudge up a ridge. Given the forbidding environment below our comfortable capsule, the number of tiny human dots is surreal.

The monochromatic white universe finally turns brown, then green, as we descend into the village of Courmayeur, the Italian Chamonix. As in its French counterpart, guides are honoured here. Statues of them dominate the centre of town. The guides’ building occupies a key position in the main square. A plaque commemorates a famous guide’s childhood home.

After a short shuttle trip, we hike two kilometres up to our mountain refuge for the night. Named after celebrated Italian mountaineer Walter Bonatti, the hut lies in a cow-trimmed meadow. The narrow V-shaped valleys of the Alps contrast with the broad, U-shaped troughs of the Canadian Rockies.

I try to enlist others to join me on a scramble up a nearby peak before supper, but they understandably prefer to research the après-hike luxuries of an Italian mountain hut, so I end up doing a two-hour solo trek. One consistency with mountains in the Old and New Worlds: a summit always looks easier and closer than it actually is. I silly-walk my way through brush, following faint trails, then kick steps up steep snowfields. My feet stay dry in the low-cut hikers. I hadn’t tried the Columbia brand before this trip, and it would have been easy to dismiss the unfamiliar product, but honestly, the gear is impressive. In many cases, I prefer it to what I’ve been using for years.

The following morning, our last full day, a cool, steady downpour greets us. The runners are embarking on a 26-kilometre trail run, guided by renowned competitors from the Ultra-Trail du Mont-Blanc — a yearly 170-kilometre marathon that includes 10,000 metres of uphill, the equivalent of climbing Mount Everest from base camp more than three times. Winners complete the race in about 21 hours, but many participants stagger in by the light of headlamps after 40 hours or more.

The rest of us trek down-mountain, then take a shuttle to a valley bottom near the village of Peuterey, where a fabulously bearded guide named Mien leads us through the larch forest, then up to our last refuge, the Maison Vieille — Old House — near the top of the Courmayeur ski lift. A statue of a cow gazes placidly at the picnic tables outside the hut; now and then, a sharp black peak peeks through the clouds behind the refuge. Known as the Aiguille Noire de Peuterey, it’s another of the many dramatic fangs in this part of the Alps.

When the runners arrive later, they come with enthused tales of via ferratas, snow, mud, rain, wind, altered routes (because of thunderstorms), sore limbs and cold — all the stuff that good adventures are made of. A local band, hired for the occasion, provides still more ambiance inside the chalet.

I haven’t heard “Strawberry Fields Forever” since I spent a summer in this part of Europe as a student. (Then, Beatles fans were still wondering whether the band would reunite.) I’ve since developed an obsession with the Arctic, so I should have requested “I Am the Walrus.” Instead, I simply ordered a latte macchiato and listened. 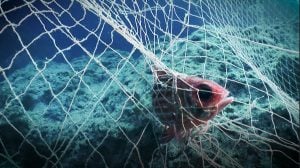