If you’ve ever returned to a city after a long period of time away and been amazed at the number of new condo buildings, housing developments, business parks, roads and shopping centres that have sprung up in your absence, you’ll likely find these new maps from Statistics Canada fascinating and telling.

The maps are part of an updated study on the changing landscape of Canadian metropolitan areas released by StatsCan on March 22nd.

The study analyzes changes in land cover and land use in and around Canadian cities from 1971 to 2011 and sounds the alarm on the disappearance of natural land covers as a result of downtown intensification and urban sprawl.

Although Canada’s built-up area* represented only 0.1 per cent of the country’s total area in 2011, urban expansion has increasingly resulted in the loss of prime farmland, simply because many Canadian cities were originally established on fertile agricultural land. The expansion and intensification of built-up areas also results in the loss of forests, wetlands and recreational green spaces – and once made, these changes are usually permanent, the study notes.

The loss of these natural features impacts everything from food production, wildlife habitat and flood protection to human behaviour. StatsCan has made the maps available to researchers and city land-use planners to further our understanding of the impacts of urbanization.

We’ve compiled a few of the maps and highlighted notable changes below.

Montreal had the second-largest built-up area in Canada in 2011, and also one of the highest population densities: 3,356 people per square kilometre. (Map: Statistics Canada. Click to enlarge)

Edmonton added 752 square kilometres of built-up area from 1971 to 2011, giving it the fastest growth rate in the country: 220 per cent. (Map: Statistics Canada. Click to enlarge)

In a comparison of metropolitan area ecosystems, Regina experienced some of the greatest loss of arable land. Close to 1,000 square kilometres of cropland, tame or seeded pasture and summerfallow was lost during the period from 1971 to 2011. (Map: Statistics Canada. Click to enlarge) 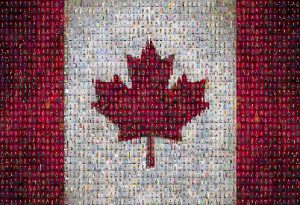