Leatherback sea turtles, classified as endangered by the Committee on the Status of Endangered Wildlife in Canada, weren’t thought to be common residents of Canadian waters until the late-1990s. They range from the Maritimes to the Caribbean and Central American coasts, where females nest on beaches in late winter. (A smaller Pacific population — not covered here — makes similarly ambitious journeys.) The world’s largest sea turtles, they’re named for their blue-black, rubbery carapace, or shell. It renders adults virtually impervious to predators, but not from harvesting and poaching, beachfront development, commercial fishing and sea trash, which have caused populations to plummet over the past 15 years.

Getting caught accidentally in commercial fishing gear is a primary threat to leatherbacks in Canadian waters. And since leatherbacks can’t swim backwards, escape from nets is a particular challenge. “If entangled sea turtles are found before they drown, they can survive,” notes Kathleen Martin, executive director of the Canadian Sea Turtle Network.

Leatherbacks eat jellyfish, but have trouble differentiating them from trash — a floating plastic bag, for instance, can look similar to their prey. Ingested plastic can block digestion and cause starvation. While there are records of blockages, it’s hard to determine how many are fatal. “In truth,” says Mike James, a Fisheries and Oceans Canada biologist, “it’s probably just the tip of the iceberg of overall mortality.”

Satellite tracking is revealing new insights into the leatherback’s migratory route. The turtles appear to use the full breadth of the Atlantic, with North American individuals swimming within 1,000 kilometres of Africa. James says these open waters, where threats of entanglement are minimal, are a safe haven. “The relative risk to leatherbacks is much higher in coastal areas.”

Adult leatherbacks and their eggs are still harvested in some countries, including Colombia and the Dominican Republic. Last spring, the Canadian Sea Turtle Network tracked one female to a beach in Colombia. Fortunately, locals near that spot had ended the turtle hunt two years earlier. “Having a Canadian turtle nesting there opened a dialogue,” notes the network’s Martin. “It had an incredible conservation value.”

Light pollution from beachfront development poses a significant threat to leatherbacks. When a hatchling emerges from its nest, it hones in on the brightest object it sees — typically the mirror-bright sea. Lights from buildings have been shown to lure hatchlings off course, increasing the risk of exhaustion, dehydration or predation. 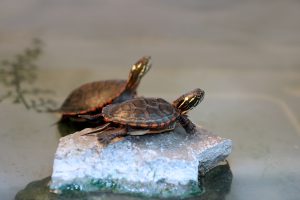