On her first official visit to the Arctic as Science Minister, Kirsty Duncan drove home the importance of climate research, incorporating traditional knowledge, and funding for innovation and research

Kirsty Duncan’s first official visit to the Canadian Arctic as Science Minister included visits to the communities of Resolute and Iqaluit, consultations with Inuit elders and scientists and a tour of a research site on the Boothia Peninsula.

Canadian Geographic spoke with the minister when she had returned to Iqaluit on July 21. Here, she discusses the impacts of climate change in the Arctic, the role of traditional knowledge and returning Canada to its status as a research and innovation power.

On her first trip to the Arctic as Science Minister

We are a government that believes in climate change, that it is the most pressing environmental issue we face. We support the Paris Agreement and we are committed to comprehensive action. So on this trip I wanted to highlight the importance of the Arctic, to see some of the changes that are occurring as a result of climate change, which is interesting and sobering — from both a researcher’s perspective and from that of the people in the North. I wanted to highlight the work of our amazing scientists as well as the importance of traditional knowledge, and we’ve come back with a wealth of information. Even in terms of day-to-day changes in the communities, we learned that mosquitoes appeared in Resolute for the very first time two years ago. We heard that willow trees, which in the Arctic usually grow very close to the ground, are changing in size. Pussy willows, usually dwarfed in the North, now stand five feet tall in Iqaluit, and dandelions have only recently started growing there.

On what ongoing scientific studies are revealing about a changing Arctic

We’d hoped to get up to some research sites on Lake Hazen on northern Ellesmere Island, but as sometimes happens in the Arctic, weather intervened. Still, we had excellent conversations with Ashley Dubnick and Brad Danielson, researchers from University of Alberta glaciologist Martin Sharp’s team, about the changes they’re seeing in the ice fields surrounding Lake Hazen on Ellesmere Island. You know how each year a layer is laid down and by studying ice cores from those layers you can work out the climate, date it back many thousands of years? In the last few years it was discovered that that process is changing, that we are no longer getting those clear layers [due to the increasing intensity of summer melting]. Climate change is starting to erase this record of the past. They said it’s to the point that they’re starting to take cores from the Arctic down to Antarctica just to store them so the climate record is preserved.

On collaboration between scientists and northern communities

We did get out to a Geological Survey of Canada site on the Boothia Peninsula, which was wonderful. Researcher Mary Sanborn-Barrie, who’s been out in the field for about 20 years, is leading a team of around 20 [mapping bedrock across the peninsula and Somerset Island], many of them students on their first year of field work. I was really excited for them to take us through a typical day: eight hours on one 10-kilometre transit, stopping at every station to record data. What really gives me hope, though, is how hard she works with the people of the nearby community of Taloyoak. She says to them, “What do you want to see? What kind of relationship will we have?” and they plan projects together as far ahead as 18 months. Every week, two members of the community are out working on the site, and when I asked one of them, a young man, what the best part of that was, his answer moved me: “I get to learn every day. I will never see the land the same way and I now watch for the story in the rock.”

Through that lens, yesterday here in Iqaluit was a real privilege. Through interpreters I got to listen to the elders here. It was humbling to hear about their lives, about the changes that they’re seeing on the land. They were very clear with me that we must spend time observing it and that we must repeat those observations. As the elders said to me, “We are the land, we are the water and we are the skies.”

I think things are changing. Southern scientists are more and more willing to work with locals, to seek out and incorporate valuable traditional knowledge into their work. But there’s work to do. I hope this is the start of a conversation where we do better.

On playing the long game

It’s going take time, but I think we’ve made real progress when it comes to investing in science. Budget 2016 included $2 billion for research and innovation infrastructure. It also contained the largest top-up to the three federal granting structures in a decade. I pushed very hard for that, and that money was unfettered, which was very different from that of the previous government.

And I asked to do a fundamental science review, which was something that hadn’t been done in 40 years. I had the results of that review released at the Public Policy Forum so we could start a national discussion on science and science funding — something that has never happened in this country. Canada fell from 3rd to 8th in higher education research and development internationally between 2006 and 2013. As a scientist and someone who wants to support science in this country, that is really concerning — for the Arctic, for the future of science and innovation in Canada in general. My job is to change that trajectory, but it does take time. 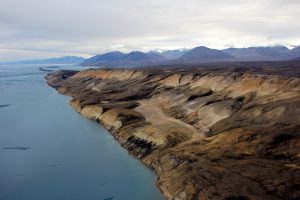 Duncan will meet with climate change researchers and community leaders in Resolute, Nunavut