The day after David Schindler survived a plane crash in a forest fire, he was back in the lab doing the work he loves. In fact, the internationally acclaimed ecologist — who founded Ontario’s Experimental Lakes Area, among other notable accomplishments — says he rarely took a day off from research throughout his 50-year career. And despite his recent retirement from the University of Alberta’s biological sciences department, that isn’t likely to change soon.

What would you say to the high school counselor who told you biology wasn’t a field you could advance in?

[laughs] I would say he needed to broaden his horizons a bit.

The counselors at my school had a very narrow view of what careers were available. Careers as university professors or research scientists were pretty foreign to people. They were probably so rare that the counselors wouldn’t have mentioned them if they had thought of them.

What is your proudest professional achievement?

Founding the ELA, and showing how the work done there can tell us things about environmental problems and how to solve them. It goes well beyond what we can do with smaller-scale experiments.

Is the science you’re doing now linked to the ELA?

A bit. I’ve been invited to continue as an advisor and I’m still writing a couple of papers on the long-term data sets we’ve collected there.

I’m writing a summary paper for some of my work on the oilsands, and a study on the algal blooms on Alberta’s Lac la Biche. I’m also trying to finish a book about the running of the ELA. For me, science is like eating and drinking. I’d feel pretty empty on a day when I didn’t do any.

Is it a guidebook for future generations or more of a memoir?

It’s a little of both. I don’t think people realize how much non-science effort goes into something like [the ELA]. There’s dealing with a staff of 30 people, who live together and work together, and having to devise ways to do experiments when you don’t have enough money.

How has your outlook changed from when you first started to now?

When I first started, I don’t think I realized how far we’re pressing the Earth’s resources. Or that population would increase as rapidly as it has. When I was 20, I thought that the Earth’s population would probably be pretty stable as a result of disease and natural catastrophes, but of course we’ve developed ways to overcome those without developing ways to curb our huge birth rates.

What is the biggest scientific issue of the day?

Whether we’re going to have the will to do anything about climate change and stabilizing the human population. I think they’re of equal importance and closely related.

What advice do you have for future scientists?

To properly devise policy for whole ecosystems, you really need to study whole ecosystems. You can’t model them; you can’t do quick and dirty little experiments that guide you with any reliability..

How do you want to be remembered?

I would like my grandchild to remember the warnings I’ve given, that we can’t press the Earth any more than we’re pressing it now. We have to back off a bit — either in our personal demands or in the size of the population — or they’re not going to have such a great future.

No, not at all! Maybe a single regret is that I should have gotten a PhD in psychology instead of ecology [laughs]. But it all worked out. If I were to do it again, I’d probably do it exactly the same way. 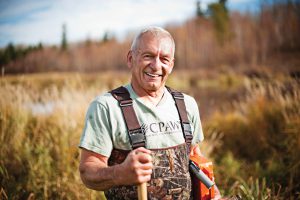