A group of four Ottawa university students won a national contest for their design of an all-Canadian zero-emissions electric vehicle.

Kaj Hallgrimsson, Jun-Won Kim, Mina Morcos, and Matthew Schuetz are students at Carleton University’s School of Industrial Design. Their design of a mid-size sports utility vehicle beat out nine complete entries, out of a total of 20 entries from across Canada.

The competition,created by the Automotive Parts Manufacturers’ Association (APMA), asked students to design a concept car which could be used to build an original, full-build, zero-emissions concept vehicle. The final phase of Project Arrow, planned for 2022, involves building and touring the concept car. The hope is that the design becomes a Canadian production electric vehicle by 2025. The competition was created in response to Prime Minister Justin Trudeau’s call for a zero-emissions future by 2050.

The vehicle’s design intended to incorporate Canadian symbolism and geography, including the Canadian Shield and natural elements such as rock, ice, and lakes.

“From the side view, it has the stance of a polar bear, with larger haunches in the back,” Hallgrimsson says.

The team completed most of their design working virtually, over a period of 12 weeks. Hallgrimsson says they spent two months developing the idea and brand identity, including what their conception of “Canadian values” were. The team then spent two to three months creating 3D models of the car.

Morcos says their design was inspired by the Canadian values of freedom, stability, and simplicity.

“Every single element of the car, including the overall design of the car, was meant to reflect those elements,” Hallgrimsson says.

Schuetz says figuring out how to represent Canada in a vehicle design was difficult.

“Creating a brand language that represents something as important as Canada is probably one of the hardest parts of the design process.”

He says the process was particularly interesting for the four of them; since they are industrial design students, none of them had prior experience designing a car.

“A lot of people can design something that looks good, but it’s much more difficult to create something that your target audience can identify with,” Schuetz says. “It also has to have elements that make them feel a certain way.” 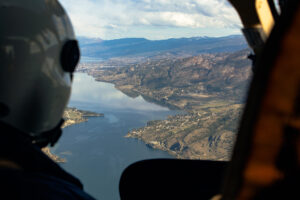 Cloud wine: heli-touring the vineyards of the South Okanagan

A couple’s guide to taking in the wine, food and unique desert scenery of Osoyoos