Most animals bulk up in preparation for winter, but not this one.

In a recent study published in the Journal of Experimental Biology, biologists found the common wood frog actually survives harsh winter temperatures, in part, by breaking down its skeletal muscle mass.

“No other scientists have really looked at the changes in the physiology of this frog in the period leading up to winter,” says John Costanzo, a professor of zoology at Miami University, in Oxford, Ohio, who co-authored the study.

The wood frog is one of the most widely ranging amphibians in North America and is native to all Canadian provinces and territories, even existing above the Arctic Circle.

To survive winter weather, wood frogs build up cryoprotectant solutes in their blood months before winter arrives. These solutes, which are mostly glucose, glycogen and urea molecules, allow the frog to lower the freezing point of its blood, preventing ice from forming in its cells — a condition which could be lethal. “We were surprised to find that the frog is able to accumulate urea by degrading some of its muscle protein,” says Costanzo.

What was even more surprising for Costanzo was how wood frogs in Alaska were better prepared for winter than wood frogs found in Ohio. Lower-latitude Ohio frogs could only tolerate winter temperatures as low as –5 C, whereas Alaskan frogs managed –16 C. The Ohio frogs did have the cryoprotectant urea in their blood stream, but not to the same extent as the Alaskan frogs. 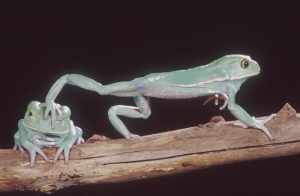 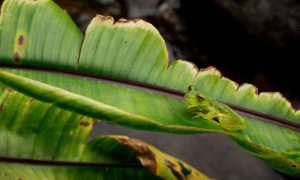 Blurring the edges: A novel form of camouflage discovered with glass frogs