Beavers reported on the Yukon tundra for the first time

Canada’s national animal has been turning up in some unexpected places lately, and while there are different theories about how exactly the beaver has managed to gain a foothold in the Arctic tundra, a recent report says climate change is likely a factor.

In 2008 and 2009, Inuvialuit hunters reported seeing beavers on two northern Yukon rivers, near the Beaufort Sea. Then, in 2015, Thomas Jung, a biologist with Environment Yukon, spotted a large dam, beaver lodge and winter food cache on the Babbage River in Ivvavik National Park. All of this suggests beavers are attempting to colonize the Beaufort coastal plain, according to an article by Jung, published in the journal Canadian Field-Naturalist.

“I was quite surprised. I had to look a couple times,” Jung says of his 2015 sighting. He asked the man he was flying with, “‘Have you ever seen a beaver dam up here? Because there’s a beaver dam.’”

Beavers have a broad range in North America, but up until now haven’t lived north of the treeline because they need wood for food and shelter.

As the Arctic warms, the tundra is undergoing ‘shrubification,’ meaning woody plants are growing in places that were once inhospitable and may be drawing herbivores like beavers further north.

Jung says how the beavers got to the Arctic coastal plain remains a mystery. A large mountain range lies between the beavers’ expected territory and their new home on the tundra and as he puts it, “I don’t think beavers are known as mountaineers.”

They may have come from the forested Mackenzie Delta, leapfrogging from river to river until they ended up far north. They also could have swum in the sea.

“The overland route is certainly challenging and the through-the-sea route is improbable,” Jung says, “but animals do improbable things quite often.” 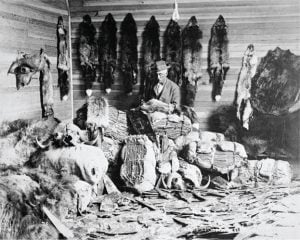