Spending a majority of their time on the seafloor, the Atlantic cod is a popular food fish that can be found contiguously along the east coast.

There are ten populations of Atlantic cod in Canada. Historically, Atlantic cod were most abundant off the coast of Newfoundland and Labrador, but because of overfishing, this population is now endangered.

The Atlantic cod is a medium to large saltwater fish, with the largest cod weighing about 100 kilograms! Atlantic cod are darker-coloured on their backs with white or cream-coloured underbellies. These colours can vary based on location, as the Atlantic cod likes to camouflage itself to match its surroundings. This fish shares some characteristics with its distant cousins, the pacific cod and the Alaska pollock: three rounded dorsal fins and two anal fins, with smaller fins near their gills and whiskers on their chins. They also share a white stripe on either side of their bodies that is not just for style; this stripe is actually a sensory organ that helps the fish detect vibrations in the water. Male and female cod are usually the same size.

Some populations of Atlantic cod undergo seasonal migrations, such as moving from polar waters in the summer and fall to waters further south in the winter and spring. Some groups move considerable distances in search of food, rather than for climate-related seasons. Atlantic cod form shoals, large groups of fish ordered by size, while travelling. Larger fish tend to lead the shoal, but the structure of the group can change when food or predators are encountered.

Omnivorous creatures, Atlantic cod feed on a wide variety of prey, with some cod even displaying cannibalistic behaviour by eating other cod! Their usual choice of food is other fish like herring and flounder, along with crustaceans such as crabs, lobsters and shrimp, and other invertebrates. 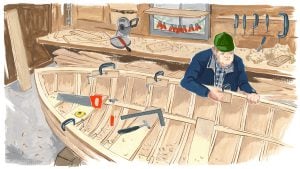 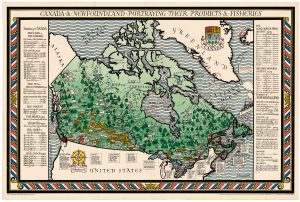 A bountiful cod industry is pictured on a 1920s map. Decades later, a moratorium would change everything.