Geography’s biggest night was bigger and better than ever.

More than 500 guests attended The Royal Canadian Geographical Society’s annual College of Fellows Dinner at the Canadian War Museum in Ottawa on November 16. Among them were dignitaries like Beverley McLachlin, Chief Justice of Canada, Lois Mitchell, Lieutenant Governor of Alberta, Senator Don Plett, Minister of Natural Resources Jim Carr, and the U.K.’s Lord Ashcroft, as well as many of the world’s foremost names in Earth sciences and exploration, including the Hon. Alexandra Shackleton and journalist Simon Winchester.

Here were some of the highlights of an evening filled with exciting announcements and tributes to geography’s best.

1. We honoured outstanding geographers and educators

The Honourable Lois Mitchell, Lieutenant Governor of Alberta, presided over the medal ceremony which preceded the dinner and saw awards and honours presented to 17 deserving individuals who have made significant contributions to the field of geography or assisted the Society in the fulfillment of its mandate of making Canada better known to Canadians and the world.

Technically our new Arctic circumpolar giant floor map has already been displayed at the Canadian Museum of Nature in Ottawa — and even been walked on by royalty — but many of the Fellows and partners of the RCGS saw it for the first time at a cocktail reception following the medal ceremony. The map will be made available to schools through Canadian Geographic Education in 2017.

Guests at #RCGS16 having fun exploring the Arctic right here in Ottawa with our newest giant floor map! pic.twitter.com/hjOCopYZ6R

3. We dined with tanks

The expansive LeBreton Gallery at the Canadian War Museum hosts an array of war vehicles and military technology, including ambulances, tanks and even a CF-101 Voodoo fighter jet, making for a unique dinner setting that impressed guests.

5. We celebrated 175 years of the Geological Survey of Canada

The Hon. Jim Carr, Minister of Natural Resources, presented the Geological Survey of Canada with a special Gold Medal in recognition of their 175th anniversary and innumerable contributions to our understanding of Canada’s geography. Established in 1842, the GSC is Canada’s oldest scientific agency; it was first created to develop a viable mineral industry in Canada but today is actively engaged in the stewardship and sustainable development of Canada’s natural resources.

.@NRCan Minister @jimcarr_wpg presents the Geological Survey of Canada with a Gold Medal in honour of their 175th anniversary. #RCGS16 pic.twitter.com/CWoolHlHU3

6. We appointed a new Honourary Vice-President

Inuit oral historian Louie Kamookak, of Gjoa Haven, Nu., has been appointed Honourary Vice-President of the Society for his innumerable contributions to enhancing Canadians’ understanding of the cultural heritage of the north and for his mentorship of Inuit youth.

Inuit oral historian Louie Kamookak has been appointed our Honourary Vice-President at #RCGS16. We are so grateful for Louie’s knowledge. pic.twitter.com/AL75Ug5mWi

7. We announced a new partnership with One Ocean Expeditions

Continuing a legacy that began with the 2014 Victoria Strait expedition, the RCGS is proud to partner exclusively with One Ocean Expeditions to lead Canadians on unforgettable and educational voyages to some of the most remote corners of the world.

8. We gave our flag to an incredible expedition

Next year, more than 150 Canadians will sail from Toronto, Ont. to Victoria, B.C. via the Northwest Passage on a 150-day expedition honouring — you guessed it — the 150th anniversary of Confederation. The Canada C3 expedition, led by the Students on Ice Foundation, will visit 50 communities on all three of Canada’s coasts, and will carry the flag of the RCGS as participants explore the people and places that have shaped our national identity.

We’re very excited to support & participate in next year’s Canada C3 expedition, a sail from Toronto to Victoria via the Northwest Passage!

9. We chose a national bird

In what was perhaps the most highly-anticipated moment of the night, Gilles Gagnier, publisher of Canadian Geographic magazine, announced that the bird chosen to potentially become Canada’s newest national symbol is the gray jay. Friendly, smart, found in every province and territory, and able to thrive in sub-zero conditions, the gray jay is a bird that truly belongs to Canada.

10. We enjoyed the wit and wisdom of Simon Winchester

Author and journalist Simon Winchester, recipient of the 2016 Lawrence J. Burpee Medal, delivered the keynote address to conclude another incredible Fellows Dinner. With his characteristic self-deprecating humour, Winchester recalled his adventures in Canada and praised the beauty of the country and the warmth of its people — and suggested that if we’re looking to update our national anthem next, Stan Rogers’ “Northwest Passage” would be an ideal choice. 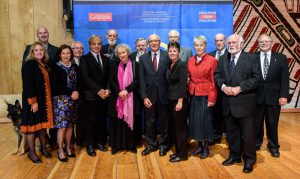 7 awesome things that happened at the 2015 RCGS Fellows Dinner