2019 North American Rolex scholar Neha Acharya-Patel shares insights from her work (and that of other Canadians) in assisting the Florida-based Coral Restoration Foundation to rebuild beleaguered reefs
By Neha Acharya-Patel
July 19, 2019

Hello from south Florida! If you didn’t read my previous article, I’m the 2019 North American Rolex Scholar of the Our World Underwater Scholarship Society. As part of my scholarship, and as the first Canadian scholar, I’m sharing insights from my work and travels this year with Canadian Geographic.

Right now, I’m in the Florida Keys, which is bordered by the world’s third largest barrier reef. Since the 1970s, the health of the reef has been deteriorating rapidly. It has lost 97 per cent of its acroporan corals, which are its major structure-building species. I have been here for the last week working with the Coral Restoration Foundation. It was established here in 2007 as the ground zero for large-scale coral restoration.

Corals are one of the most important animals in the world. They not only form the physical structure of many reef systems worldwide, but are crucial for 25 per cent of all marine diversity. Hard corals are considered the keystone species of warm-water reef ecosystems. Unfortunately, with the progression of the human-induced changes on the Earth (a geological epoch many scientists now refer to as the Anthropocene), the well-being of such ecosystems is decreasing at an incredible rate worldwide. Physical damage, increasing levels of nutrient and sediment runoff due to coastal development and subsequent mangrove loss, and ocean acidification are all stressors. Here, however, the largest problem is the warming oceans. 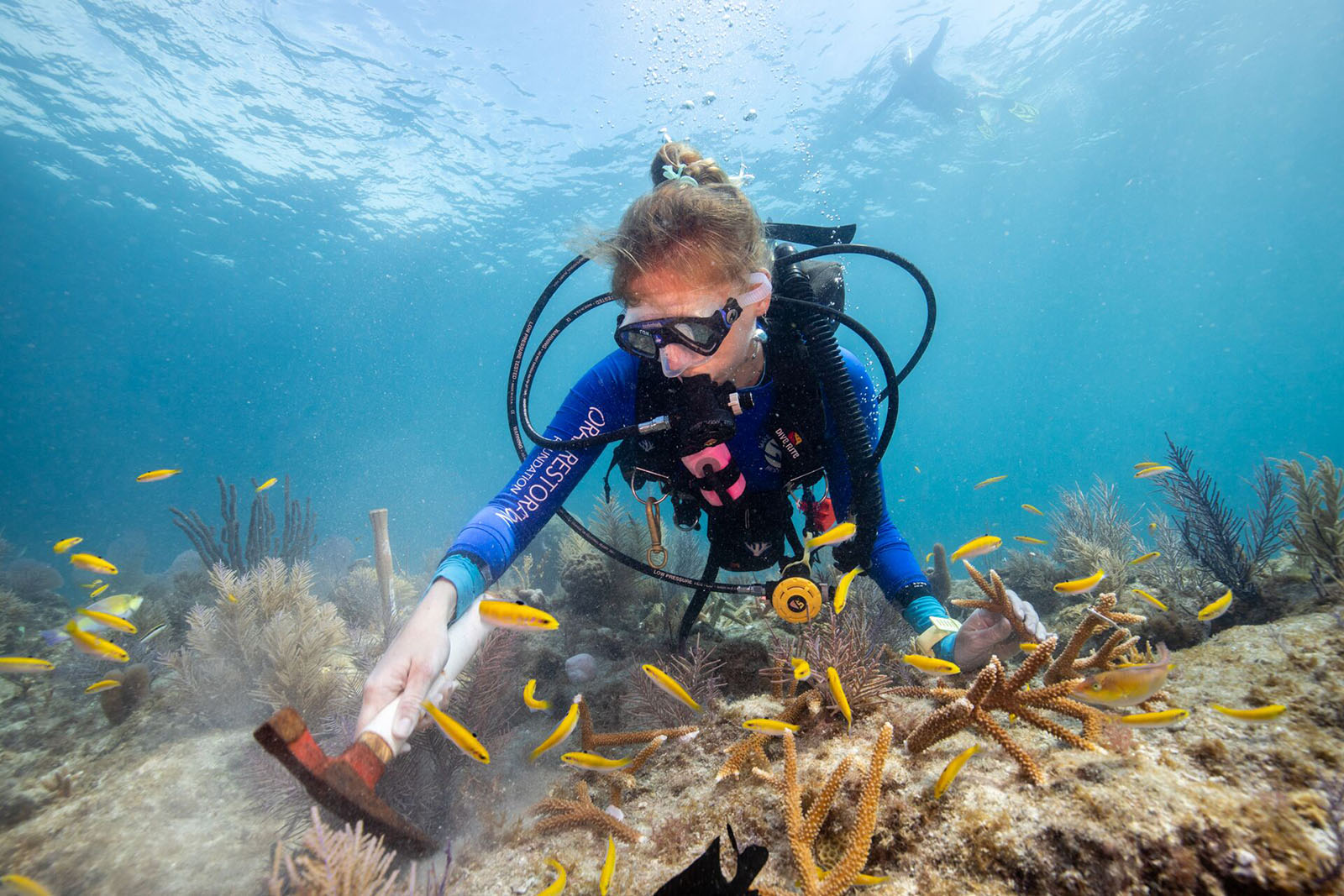 Many corals are symbionts, meaning they live in harmony with another organism for the benefit of both. Zooxanthellae — a type of algae — are symbionts with corals. They live within coral polyps, and through photosynthesis provide their hosts with a large part of their energy resources — in some species more than 90 per cent!

When a coral becomes stressed by heat or light, however, the zooxanthellae will cause corals to expel them, thereby losing a majority of their food source and making survival much more difficult. This process is called coral bleaching.

At the present moment, 75 per cent of all coral reefs in the world have experienced bleaching-level heat stress, and in 30 per cent of reefs, it has reached mortality level. Corals can recover from bleaching if they have enough time to repopulate their algae colonies without recurring stress. If we do not make significant changes now, every reef in the photic zone (the surface layer of the ocean that receives sunlight) will be within bleaching threshold annually, meaning they wouldn’t have enough time to recover. 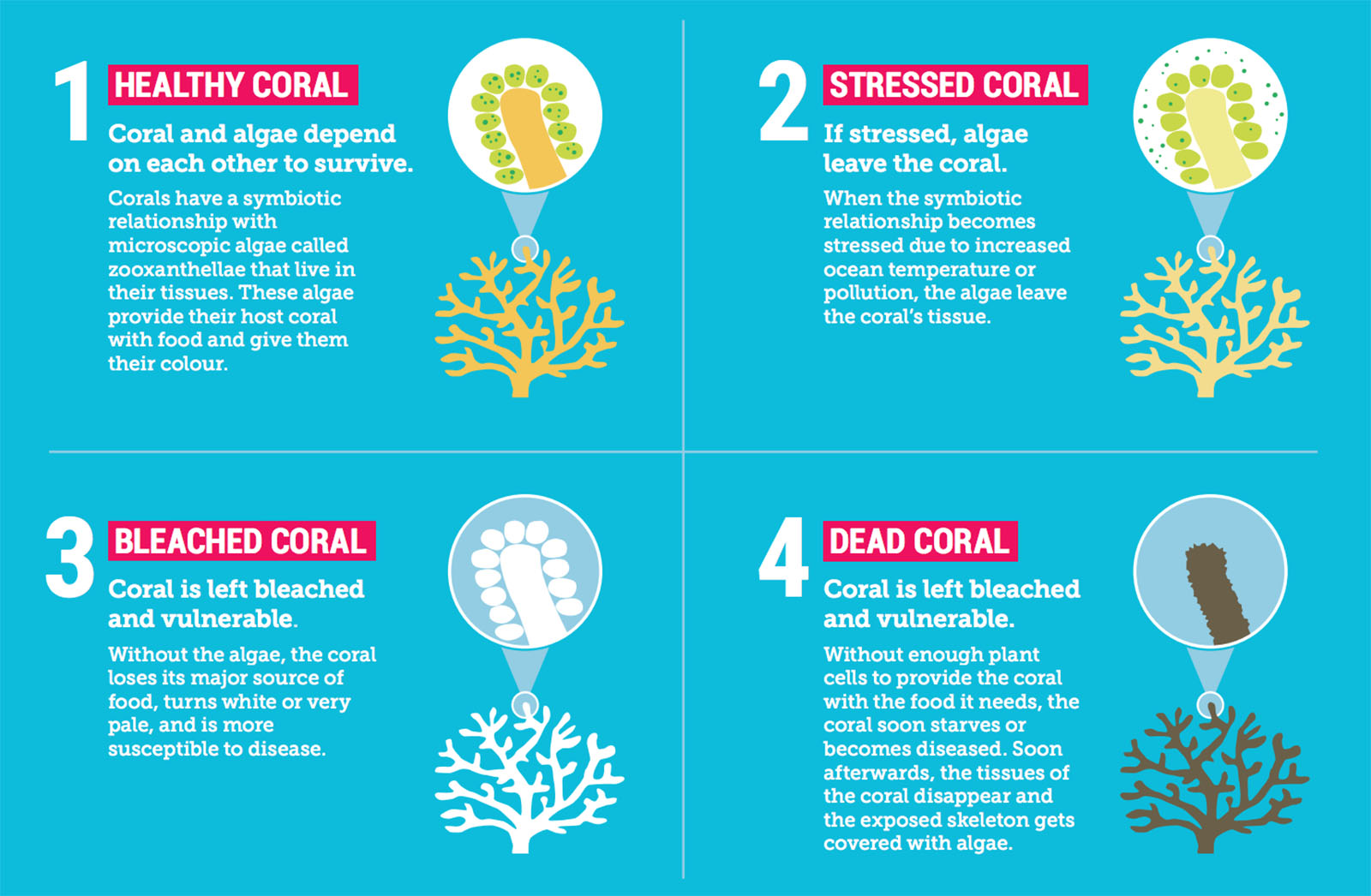 To address this, the Coral Restoration Foundation is physically “outplanting” coral babies onto reefs. The goal of the CRF is to kickstart a healthy coral population that, once established, should reproduce with each other. Currently, the majority of coral propagation is through a process called fragmentation. Fragments of genetically identical coral are grown on monofilament suspended from PVC “trees.” These trees form a coral nursery, which requires constant maintenance and monitoring.

I spent a couple of days at the nursery cleaning algal and other unwanted invertebrate growth off of the lines and the PVC. As it’s the beginning of the summer, we also pulled the trees down a couple metres to the colder water to alleviate heat and light stress. The CRF has seven different nurseries throughout the Keys, the largest being the Tavernier nursery comprised of 500 trees with different coral species and genotypes. They also have a huge experimental section where different scientific collaborators can test their methods and work in the field.

The idea behind the nursery is to make it easier for coral babies to grow to sizes that can likely succeed on a reef. Like all other ecosystems, coral reefs with higher biological and genetic diversity often do better because they can collectively resist a wider array of stressors. This is why the CRF and similar organizations try to grow many different genotypes of a species found in the wild, and outplant them together at a site, with the idea that reproduction between them will increase diversity. Over the last couple of years, they have had about 80 per cent survival, and some staghorn coral colonies they outplanted two years ago have already reproduced naturally. The extent of survival, however, varies between different species and sites. The CRF works with many collaborators to determine why this is, and how they can use scientific data to be more efficient. 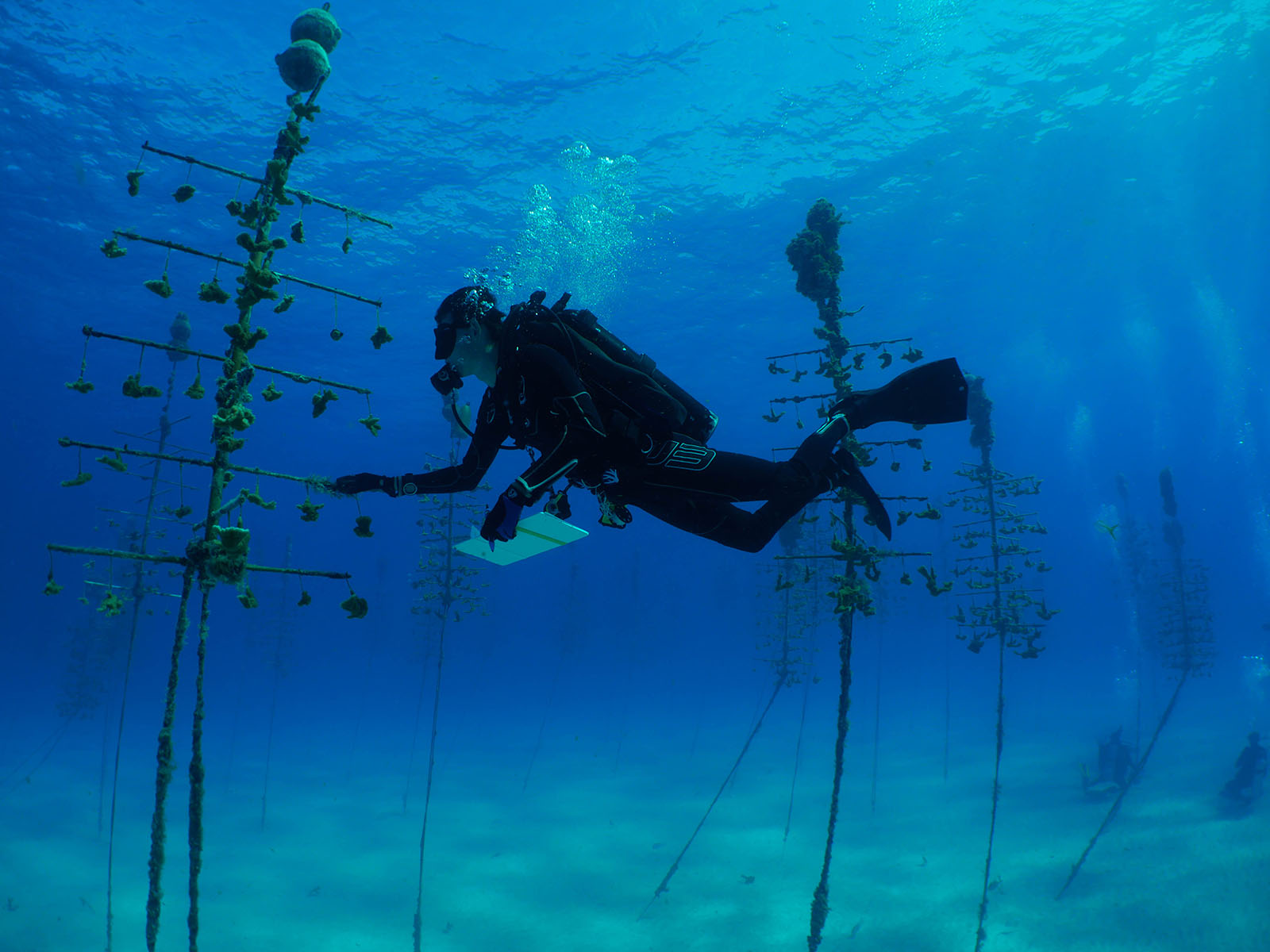 Two graduate students in the faculty of science at the University of Alberta — Aneri Garg and Noelle Helder — are here now, and looking at how fish populations respond to coral restoration. This is important information because fish have a vital role to play in the ecosystem when it comes to nutrient cycling. Many smaller fish need corals for habitat and protection, and larger fish need the smaller fish and so on. In addition, many fish graze on the alga that competes with the corals for growth. Which coral species and structural configurations attract which fish communities can help inform which restoration strategies are best suited to support a productive ecosystem.

The CRF staff and interns are in the field most days of the year, either working in the nursery or outplanting corals. They also host events such as Coralpalooza, an annual mass-planting event held on World Oceans Day (June 8). I was lucky enough to join them for the event this year, and we planted at a historic site called Carys Fort, north of Key Largo. The incredible reefs there were completely wiped out, but now due to the efforts of the CRF, corals are recovering, and we will be able to watch as the ecosystem that relies on them begins to thrive again.