With a seasonal wine list hand-picked by celebrated Canadian sommelier Véronique Rivest, The Forks Market has become a can’t-miss destination for thirsty travellers

Snooty oenophiles might think that the words “Winnipeg’s wine scene” constitutes a contradiction in terms, but if they know what’s good for their palate, they’ll pay a visit to The Forks Market, a popular public space where world-renowned Canadian sommelier Véronique Rivest has just unveiled her latest curated seasonal list of 20 wines at The Common, the market’s bar.

Rivest, who owns the lauded Soif Bar à vin in Gatineau, Que., presented her first selection of wines in January, but with the busy summer season about to go into full swing in Winnipeg, even more locals and visitors who enjoy a good tipple will be able to benefit from her expertise as they wander the market, glass in hand.

Here, Rivest and Tabitha Langel, a co-owner of the market’s Tall Grass Prairie Bread Company, talk about the combination of wine and food at The Forks.

On selecting the wines

Véronique Rivest: It was quite wonderful, because they basically gave me carte blanche — it was up to me to figure out what the clientele is like and what people are looking for. I don’t want to alienate customers, so I curated a list of wines that included selections they’re familiar with, such as a Cabernet Sauvignon from Chile that people have grown to love over the years. But then there’s also white wine from Greece and Austria, both of which people may not be as familiar with. All these selections are by the glass, which allows people to explore. I always say that the greatest thing about wine is that it brings people together, so hopefully there’s a little something for everyone.

On pairing food and drink

Tabitha Langel: I haven’t tried to pair our cinnamon buns, but I have a lot of fun with sourdough breads. And I can tell you that in the winter, a red wine with our raisin bread definitely helped me deal with – 40 C weather.

VR: I’m a big believer in the individuality of our tastes. There are no two people that taste the same way and no pairing that will be universal. For example, there’s a great fish and chips shop at The Forks, and some people will think that beer is great with that dish, but sparkling wine pairs really well with it, too. Actually, anything that’s fried is kind of fun with sparkling wine. When it comes to bread, I can’t help thinking right away about beer, which a lot of people define as being liquid bread. But because alcohol is made with yeast, you’ll find that sparkling wine showcases yeastiness and has bready notes — for me, it’s a winning combination. With cinnamon buns, I think my tea-loving side takes over!

“I always say that the greatest thing about wine is that it brings people together, so hopefully there’s a little something for everyone.”

On the location, being progressive and the idea of community

VR: The Common is a perfect name. It’s a place surrounded by food vendors of all kinds, a place where you can take your wine or beer and actually walk around the market. I wish we could take this concept and present it to all of the liquor authorities across Canada, because it’s extremely progressive. In most provinces, anything that has to do with the purchasing, selling or distribution of alcohol is highly regulated, but these are all completely outdated regulations that were created in the era of Prohibition and are absolutely irrelevant today.

TL: I always say “Back to the future.” This place points back to a time when we understood clearly that we were not just individuals, but that we were tribal. I grew up in that tribal context, eating communally, and when I’m in a place like The Common, I think about that, how people want to eat together — it’s in our DNA.

On eating and drinking the right way

VR: People are more and more conscious about what they eat, but — excuse my language — they still drink crap. I often say that there’s as much difference between an artisanal terroir wine and an industrial wine as there is between an artisanal raw milk cheese and Kraft Singles slices. That amount of processing also exists in the world of wine.

TL: It’s only in the last year that I’ve become aware of how much processing there is the wine industry — wine has been able to protect its image in a way that food hasn’t — but it’s been a problem in the food business for a long time. To me, the most important things about food are accountability and transparency. When we bring food from South Africa, Chile or California, we don’t know the condition in which it’s grown or what’s used on the land. But when you support local agriculture, you can meet the people who work on the farms, and that’s the beauty of it — they’re the bridge that connects the people that eat the food to the people that grow it.

TL: At first, I was very leery about the wine bar at The Common — I thought it would discourage a family atmosphere. But it has done the opposite. There’s an inclusiveness here, like walking into a dining room. It’s that simple.

VR: It brings people together from every walk of life. It’s like having a big family table — getting together, sharing good food, good wine and good conversation. So I hope that people leave The Forks fulfilled, happy and with a sense that they’ve enjoyed the simple pleasures in life. 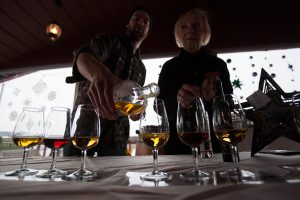 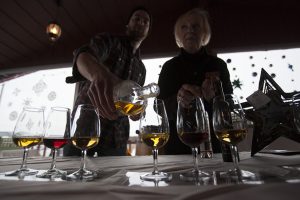 How to make the most of the Niagara Icewine Festival

The holidays may be over, but January can still be a time of celebration by bundling up and heading to the Niagara Icewine Festival