What's the price of peace of mind? A look at a pair of Pickpocket Proof Pants

Mid-town Manhattan, 1991. Crime in New York was near its all time peak. Times Square was still full of seedy strip clubs and drug-pushing hustlers. If you told anyone in town that in 10 years it’d have a Disney store and the tourists would be queuing for the privilege of pinching the Speedo-clad butt cheeks of a Naked Cowboy troubadour, they’d have laughed in your face. This was a city that needed Batman, but all they got was Rudy Giuliani.

That year, there were an astonishing 2,571 murders in the city, but this statistic pales in comparison to the number of thefts that were reported. Between burglaries, robberies and car thefts nearly a million people had something or other lifted from them that year. On that steamy July afternoon, my wallet became one of those things.

Whoever pickpocketed me that day was surely disappointed with their haul. I was just 13 years old, and had maybe 10 bucks in my wallet, 15 at most. And it was Canadian currency, no less. The thief might have thrown it into the first trash bin he came upon. From my perspective, the crime was just as fruitless. I had my wallet lifted in the big city, and I didn’t even get to have an interesting story as to how it all went down. If I’d been held at gunpoint for it — or even been in Hell’s Kitchen at the time — I could have at least impressed my friends with the tale.

As it happened, I was walking on a busy sidewalk, somewhere in New York City, with untold numbers of people brushing past. One of those people was adept at covertly relieving people of their valuables, and that person ended up with my wallet. I didn’t even notice. In the 21 years since that day, I’ve traveled to plenty of other places where pickpockets thrive, but no other thief has yet managed to successfully relieve me of my wallet.

Not that no one has ever tried. I’ve swatted away sticky fingers on crowded Cairo metro trains, while wading through the hordes that flock to see La Joconde at the Louvre and even while kneeling to photograph a stupa at the Labrang Tibetan Buddhist Monastery in western China. What do all of these pickpocketing attempts have in common? It’s unlikely anyone would have even bothered if the design of my clothing didn’t leave my wallet practically hanging out of my back pocket.

Enter Clothing Arts, a Long Island-based company that recognized how standard western clothing fails travelers, and did something about it. Their line of Pickpocket proof pants — P-cubed for short — aim to protect your valuables from thieves. The pants pockets — front, back and cargo — are all doubly protected. Buttons + zippers = security. Accessing the pockets would take time, and you’d be sure to notice a pickpocket long before they got access to any of your valuables. In the rear left pocket there’s even an additional passport-sized pocket protected by yet another zipper inside the already protected pocket. Pretty secure.

Of course, you do pay a little bit for that security in during everyday wear. When wearing the pants anywhere that you don’t need to be constantly alert — which you might want to do, because they’re both comfy and decently stylish – all of that protection can be a little cumbersome. On a recent trip to Lake Huron’s Manitoulin Island, where there has probably never been a pickpocketing at any time in living memory (or before), I found myself leaving the pants’ pockets unbuttoned, which disrupted their tidy look a bit. If you’re more fastidious with fashion than I am, you probably won’t let this happen, but if you’re occasionally a little bit lazy with the way you look — let’s say you occasionally leave your shoes untied, or don’t know how to tie a double Windsor – you might find that you don’t bother to re-button these pants pockets, which gives them an asymmetrical look.

The Adventure Traveler pants I tested also deal with another problem that anyone who has ever lived out of backpack has experienced: lingering travel grubbiness, aka dirty backpacker syndrome. Clothing will get dirty when you travel; it’s just a fact of life. At times it can seem like you spend half your time wringing soap out of your pants over a hostel sink. At others, it can seem like the locals are all calling you a smelly, dirty backpacker. Because, well, if you aren’t actually bent over a sink at that very moment, energetically washing your clothes by hand, the chances are pretty good that’s exactly what you are.

In an effort to deal with this, Clothing Arts coats its garments in Teflon. Dirt and grime don’t stick to them like they do to other clothing, and even after days of travel, the pants still look clean. You probably wouldn’t want to spend your whole life walking around in Teflon-coated clothing, but when you’re traveling, keeping your clothing cleaner for a longer period of time will definitely improve the experience.

To prove the pants mettle, Clothing Arts took them to India, wearing a single pair of pants for a full month of subcontinental travel, and claiming that at the end of thirty days, they looked as good as new, more or less. Having traveled in India, I was a little skeptical of this claim, so I put Clothing Arts Adventure Shorts to a similar (if somewhat less rigorous) test, wearing them for five straight days of my daily life. At the end of five days, the shorts still looked perfect. Spills were easily wiped away, never setting in to the pants. It’s plausible that they would remain clean through a month in India, but I’m not sure I’d recommend trying. The shorts did smell exactly as bad as any other pair of shorts worn for five straight days.

At $109 per for my pair the Adventure Traveler pants and $89 for the Adventure Travel shorts, Clothing Arts gear is definitely on the pricey side. (Their business traveler gear is slightly cheaper.) The Adventure Traveler series cost will make them a hard sell to the budget conscious — who undoubtedly make up a hefty portion of the adventure traveling demographic — but those with any wiggle room in their travel budget may want to consider picking themselves up a pair, in part for the peace of mind they provide. Design-wise, they’re unlike any other pants on the market. They’re high quality, and (after a few weeks wear) seem as though they’ll prove very durable. Above all else, they would foil a lot of pickpocketing attempts, and their price is a lot lower than the card replacement fees you’re on the hook for when you’re wallet goes MIA. And if it ever does, you’ll no doubt be wishing you had invested in a pair of these pants. 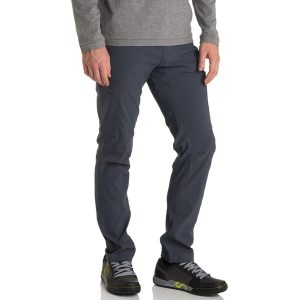 If you’re only going to own one pair of pants, make it these