What it's like to sail aboard a working freight boat

It started as an aquatic transportation service on the remote British Columbia coastline. Now, Marine Link Tours sells that experience to ride-along passengers. For five days, the clients live alongside the long-standing crew (some of whom have been with the company for a quarter century), and see what it’s like to work the coast. While it’s a less glossy tour than what might be found on a giant cruise ship, Guy Adams would argue that passengers are more fully immersed in the stunning landscape.

What’s it like to be on this tour?
Every sailing is a little bit different. We have two general geographic areas, and the sailing is designed around a few key features that we always try to go to, and then we go where the freight takes us. By the time you’ve done five days you just become a big family. The passengers get to see everything that happens out there. We’ve developed a bit of a social world with the returning customers.  In any given year, a quarter of our passengers have sailed with us before. We even have some people who come multiple times a year.

Why do you think you have such a loyal fan base?
These people are looking for an intimate, honest experience and that’s what they get. You’re not going to be dancing on the deck unless its empty and someone’s got line dancing on their radio. It’s a freight boat first.

What’s the best thing about being out on the water with Marine Link?
From my perspective, it’s the independence and freedom. From a passenger’s perspective, I’d say that for the first timers there’s a certain amount of awe. There’s the learning and understanding of the industrial world mixed in with the rest of it out there. We exist because of industry along the British Columbia coast. It’s tightly controlled and highly regulated. A lot of passengers are just as interested in seeing us do our job as they are in the landscape and wildlife.

When they come back what are they most surprised by?
How remote and beautiful about the B.C. coast is, but that there are people up there making a living. Only the people who’ve taken the time to travel the B.C. coast really understand it.

Why do you like doing what you do?
I was pretty much born into it. My father was a commercial fisherman; my mother came from four generations of commercial fisherman. I decided I wanted to see my kids grow up, so I needed to be a little closer to land, but the sea and boats are what I know.

Where do you see Marine Link’s future headed?
I think we’re going to maintain the same approach that we have for the last 20 years. The complication is that the nature of the freight is changing, and where we used to deliver a lot of small things that was amenable to the cruise, now there’s larger things, which is less compatible with what the aurora does. We would love to expand but we’re all blue-collar folks here. So we take it at that pace. But we’ve got a company that people seem to believe in. I think that’s a testament to how honest the experience is. 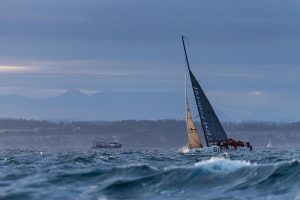 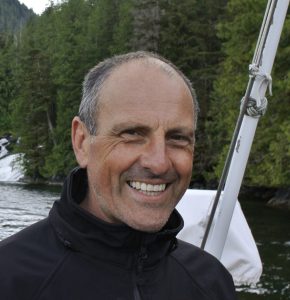 One year on, adventurer Bert terHart on his monumental world circumnavigation and future plans