The Vancouver Parks Board approved amendments to a city bylaw on May 15 that will prevent the display of cetaceans in city parks. The decision has made staff of the the Vancouver Aquarium, outside biologists and aquarium supporters concerned about the future of the aquarium’s marine mammal rescue program.

Supporters of the Vancouver Aquarium gathered on May 15 outside the parks board meeting to protest the ban, underneath umbrellas and ponchos, chanting “Every animal matters.”

“The biggest heartbreak for us is that for 50 years we’ve rescued any marine animal we’ve come across,” said John Nightingale, CEO of the Vancouver Aquarium in an interview. “We won’t be able to do that for cetaceans now.”

The parks board says that the ban should have little impact on the marine mammal rescue program, as most of the animals rescued are seals, not cetaceans. That proved little comfort for Nightingale and aquarium supporters. “Every animal counts,” said Nightingale. “All we want to do is rescue the ones that need help.”

According to Nightingale, many cetaceans that need rescuing cannot be released back into the wild, and require a permanent home. Because they will not be able to house them at the aquarium and have nowhere else to send them, Nightingale is concerned that they will be forced to euthanize the ones that can’t be released.

“What will happen now is that we’re going to have animals being stranded on beaches”, said Andrew Trites, director of the marine mammal research program at the University of British Columbia. “The only option will be to kill them, and I think it’s criminal.”

The parks board unanimously voted to amend the bylaw at the beginning of March. The move followed months of debate about keeping cetaceans at the Vancouver Aquarium after a mother beluga and her calf died just days apart in November from a toxin in the water.

Parks board commissioner Catherine Evans told the CBC that this ban is a question of the ethics of keeping animals in captivity. “I think we have reached the point now where we know that we shouldn’t where there are other options,” she said.

While new cetaceans cannot be brought into the aquarium anymore, the three cetaceans currently housed at the aquarium are allowed to remain but are prohibited from being involved in any shows or other forms of entertainment. 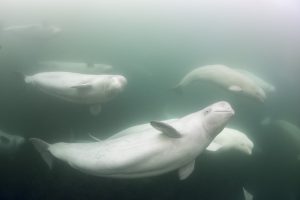 City’s park board to present a bylaw amendment that would ban the importation and display of whales, dolphins and porpoises