City’s park board to present a bylaw amendment that would ban the importation and display of whales, dolphins and porpoises
By Rachel Levy-McLaughlin
Advertisement

The Vancouver Aquarium is appealing to the public to send a message to the city’s park board, urging that body to reconsider its decision to amend a bylaw that could ban the aquarium from displaying live cetaceans, a move that the aquarium’s president and CEO says would affect the institution’s research and devastate its marine mammal rescue program.

The aquarium, which is located in Stanley Park, is expected to see the wording of the bylaw on or before May 15, the date by which the board is scheduled to begin its review of the regulation. On March 9, the park board directed staff to amend the bylaw to prohibit the importation and display of live cetaceans in Vancouver parks.

“The timing and execution of the proposed amendment isn’t yet known, but a ban on displaying all cetaceans at the Vancouver Aquarium will have a deep impact on the research we do and devastate our marine mammal rescue centre,” said John Nightingale, president and CEO of the aquarium, in a press release.

In its appeal, which comes with a pre-written email message that the public can send to the park board, the aquarium says, “We have the specialized resources and expertise to rescue, rehabilitate, and care for marine mammals that cannot return to their natural habitat. But the recent Vancouver Park Board proposal to ban cetaceans — whales, dolphins, and porpoises — from the aquarium puts this important work at risk. The proposed ban not only jeopardizes Canada’s only marine mammal rescue program, it would eliminate our ability to provide the necessary care for cetaceans that cannot survive on their own.”
The decision to amend the bylaw came just weeks after the aquarium announced a new beluga whale conservation program that would have lasted until 2029. The program was scheduled to bring belugas currently on loan to other aquariums back to Vancouver for research and display.

While the live display of marine mammals has long been a contentious issue, it has seen a surge of debate in Vancouver since November 2016, when a female beluga and her calf died from a toxin in the water at the aquarium within days of one another.

A statement from the park board noted that it fields thousands of complaints from the public about keeping live cetaceans on display. “My fellow commissioners and I unanimously supported changing the bylaw to prohibit the display of cetaceans at the aquarium,” said park board chair Michael Wiebe in the statement. “This is a historic decision following many years of debate about cetaceans in Vancouver. We applaud the valuable work by the aquarium in public education and conservation and look forward to continuing our strong partnership into the future.”

But it’s not just the aquarium’s management who are voicing concerns about the possible effects of the amended bylaw. Andrew Trites, the director of the University of British Columbia’s marine mammal research program, worries about the repercussions the bylaw could have on his work. “A lot of my career has been focused on how to save animals in the wild,” said Trites, who works with the aquarium to conduct research on marine mammals. “The research we get from animals in captivity is critical. It’s changed our whole understanding of how animals live in the wild.”

Trites said that the up-close research on captive animals allows researchers to study aspects of a species such as its metabolism, which cannot be studied on its wild counterpart. “This ban that’s coming is basically saying we don’t need any research,” said Trites. “Saving wild animals takes research, and there are certain things we can’t learn unless we work with animals.” 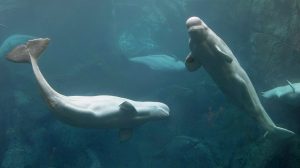