As winter weather approaches, searchers focus on whatever areas they can hunt while they can
By Tyrone Burke
Advertisement

After colliding with a shoal early last week, the Martin Bergmann returned to port at Cambridge Bay on Friday so that local divers could inspect the hull for damage. Even though the ship hit the shoal hard, there was no damage done to the boat, and by Saturday evening the crew was headed back to work in the Queen Maud Gulf’s southern search area to continue its hunt for Sir John Franklin’s lost ships.

Winds from the northeast pushed a tongue of ice south into the Victoria Strait, covering upwards of 90 per cent of the ocean’s surface area in places and forcing the Bergmann to a southerly route. The winds stirred the sea in to a three-metre swell that limited the ship’s speed. After weathering the winds at anchor on Sunday night (Sept. 7), Parks Canada’s underwater archeological team was again searching for Erebus and
Terror using side-scan sonar by 9:30 a.m. Monday.

“The little boat is doing big work out here,” says Gerry Chidley, one of the co-captain’s of the Bergmann.
In the early days of this year’s search, calm weather and endless daylight allowed the crew to search around the clock. As we have progressed toward the autumn equinox, days have shortened considerably, limiting the team’s ability to operate in more treacherous parts of the search area.

The weather has also grown increasingly more difficult. In August, weather was clear, and the team saw some of the calmest seas since they began work on this project in 2008. Recent days have seen light snow, falling temperatures and increased winds. The forecast for the coming days is not promising, but searchers remain optimistic.

“Being on location allows us to take advantage of every window of opportunity to search for the ships, no matter how brief it might be,” says Parks Canada’s Thierry Boyer. “Right now we’re able to use our sonar only when we’re headed south. So we’re towing the unit in that direction, taking it out of the water, then returning to the north to head south again. It’s only about half as efficient as we usually are, but it’s the only way to get any work accomplished in these conditions.” 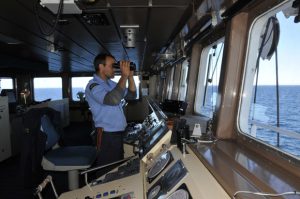