Nothing has shaped the Canadian landscape more than ice. Our country was once covered by more glaciers than anywhere else in the world, and Alberta is still home to one of the most famous floes ever to gouge its way through the landscape: the Columbia Icefield. The largest frozen ice mass south of the Arctic Circle, it feeds six major outlet glaciers — all of them retreating. Here’s how you can experience Alberta’s slowly vanishing natural wonders.

• Unveiled this May and already an award-winning feat of engineering, the Glacier Skywalk is minutes from the Columbia Icefield Glacier Discovery Centre. Featuring a cliffside interpretive walk, the trail leads to the main event: a glass-floored observation platform that juts out 280 metres above the Sunwapta Valley. From this impressive perch, you can see the monumental effects of glaciation.

• For glacier fans with deep pockets, consider a helicopter tour. Canadian Outback Adventures and Mountain View Helicopters will get you up close with the glaciers surrounding Mount Assiniboine, or you can soar 3,000 metres above the Cline, Lion and Lioness glaciers with Brewster Travel Canada.

• The Athabasca Glacier is one of the most accessible (and thus, busiest) glaciers in North America. It is visible from the spectacular Icefields Parkway that connects Banff and Jasper national parks, and you can park your car at the Glacier Discovery Centre just north of the park boundary and walk right up to it. (But don’t climb on; many have died after falling down hidden crevasses.) Although the whole parkway can be driven in a little more than three hours, budget a full day to enjoy all 13 suggested stops, including aquamarine Peyto Lake and waterfalls that drop from Cirrus Mountain.

• Want someone else to do the driving? Giant rubber-wheeled “ice explorer” buses take you from the Glacier Discovery Centre right on top of the Athabasca Glacier.

• Bring your camera to Mount Victoria, one of the most photographed mountains in the world. Take the 5½-kilometre (one-way) hike from Lake Louise to the Plain of the Six Glaciers. There you’ll see, true to its name, the Aberdeen, Upper Lefroy, Lower Lefroy, Upper Victoria, Lower Victoria and Pope’s glaciers along the way.

• Marvel at the Columbia Icefield’s longest tongue of ice by hiking almost three kilometres along Parker Ridge. Here, you’ll be rewarded with sweeping views of the Saskatchewan Glacier and the opportunity to stroll through an alpine meadow of rock jasmine and forgetme- nots. There’s also a decent chance you’ll spot a pika or mountain goat along the way. Tip: Head out early in the day. You’ll miss some of the crowds and can enjoy better light for viewing the glaciers, most of which face northeast.

Five things you may not know bout these icy mammoths 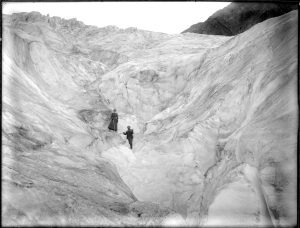 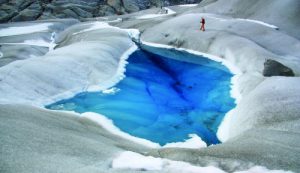 Stories of Ice: Adventure, Commerce and Creativity on Canada’s Glaciers