How bikeable is your neighbourhood? There may soon be an index for that.
By Kathleen Wilker

When Meghan Winters bicycles around Vancouver with her two-year-old on a bike seat and her five-year-old pedalling his own two-wheeler, she looks out for more than potholes and turning cars. The Simon Fraser University professor, who studies the link between health, transportation and city design in the school’s faculty of health sciences, is combining her main mode of transportation with her research in an attempt to better understand what makes neighbourhoods “bikeable.”

“We’re raising awareness about which cities and which parts of these cities are bikeable,” says Winters, who developed Canada’s first “bikeability index” last year as part of her doctoral research in the Cycling in Cities program at the University of British Columbia.

The index, the culmination of five years of research, is a mapping tool that measures five factors that make neighbourhoods more or less bike friendly: the quality of bike routes; the availability of facilities such as bike lanes and bike parking; street connectivity; topography; and land-use considerations, such as whether bike paths are beside major arterial roads. In creating the index, Winters drew on the results of a survey of more than 2,000 current and potential cyclists in Metro Vancouver, as well as focus groups and travel-behaviour studies. Layered on a map of Vancouver, the results of her research highlight areas that are conducive to cycling and areas that need more work, helping planners improve the city’s bikeability.

After the Vancouver bikeability project generated interest, Winters received funding from the Canadian Institutes of Health Research and the Heart and Stroke Foundation to expand the index to cover 10 municipalities across Canada, from Victoria to Halifax. In the process, Winters has found several challenges, including the fact that there’s no consistent terminology for infrastructure such as paths and shared lanes. “When we’re trying to generate comparable data across the country,” she says, “we need to ensure that we’re categorizing things such as trails or paths in the same way.”

But this is just a bump in the road, not a huge barrier, and by partnering with Seattle-based Walk Score, an organization that ranks the walkability of neighbourhoods in Canadian and American cities, Winters is using her research to create a Bike Score website, which is scheduled to go live this year. She will also share her findings with cycling advocates, city planners and government officials from around the world at the Velo-city Global international cycling planning conference in Vancouver early this summer.

Moreover, despite the differences among far-flung communities, Winters believes there is a universal truth about urban cycling: one of the most effective ways a city can increase the number of cyclists — and, in turn, the number of healthy active citizens — is by creating attractive bike routes that are separated from both traffic and pedestrians. “Once a good cycling network is in place,” she says, “education and promotion activities can go a long way to increasing cycling rates.” 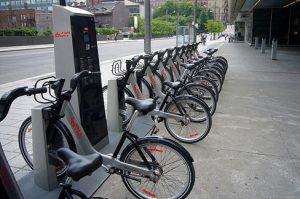