Rolling through the vineyards: taking MEC's Audax Pannier on a Sonoma County ride

The sun is starting to disappear behind distant mountains, and as I pedal the quiet, winding roads that link Sonoma County’s vineyards, my bike had begun wobbling from side to side. It is that the wine I chose not to spit out at winery tastings has me a little tipsy; it’s because my ride is being tugged laterally by the weight of nearly a dozen bottles of Zinfandel that I’ve decided warrant a place in my wine rack.

Even at the best of times, my rental hybrid bike would no match for the Lycra-wearing tech millionaire speedsters zipping by on their $5500 custom built road bikes, but with the winter sun warming my face — and the knowledge that a deep freeze has set in back in Ottawa — I couldn’t be happier with the languid pace.

With the classic look of the Audax Roll-up pannier by Mountain Equipment Co-op gracing my bike rack, I feel more like a film character traversing the Burgundy countryside on 1950s celluloid than a 21st century tourist navigating the charming back roads of California wine country.

Bicycle panniers weren’t always as ugly as they are today. In dog-eared black and white photographs, understated bicycle baggage has an elegant look. But as bikes became ever more brightly coloured, other bike gear followed suit. The result: a riotous mix of hues that overwhelms the senses and just isn’t very stylish.

If you commute on two wheels, you eventually resign yourself to the fact that whatever bag you use will be aesthetically substandard, and you will need to keep some other bag around to take with you to meetings, appointments or anywhere else you need to look even vaguely professional.

Simply put, the Audax is the solution to this problem. Strapping it onto your bike rack, it’s a perfectly functional pannier. Once you’re at your destination, it looks presentable — even stylish — in professional environments. It crosses over this line beautifully, its removable brown leather shoulder strap even tucking neatly inside as you ride to avert spoke catastrophes.

In some respects, the Audax does suffer a bit in comparison to some of its less stylish cousins. It isn’t as waterproof as some of its more colourful synthetic cousins, and it doesn’t come on and off of a bike rack quite as quickly as many panniers do. Instead of the hook system in common use, the Audax uses a somewhat more cumbersome system of leather straps, buttons and snaps. But if you’re even considering the Audax, chances are it’s the pannier’s look that has drawn you in, and on that front it undoubtedly delivers. 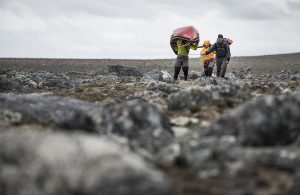 MEC is now the official outfitter of the RCGS expeditions program