Canadian marine mammal researchers have proposed closing fishing grounds in Nova Scotia and New Brunswick this summer to help protect the endangered North Atlantic right whale, a suggestion that has drawn criticism from members of the fishing industry and scientists alike.

The proposal, which is outlined in a paper published in the July issue of the journal Marine Policy, suggests the summer closures of fisheries in the Roseway Basin off the coast of Nova Scotia and the Grand Manan Basin in the Bay of Fundy, where North Atlantic right whales feed during the summer months.

Although the animal is federally protected, it still faces threats, the biggest of which are entanglement in fishing gear and vessel strikes. The paper notes that about one quarter of the 525 North Atlantic right whales believed to remain are entangled in fishing gear every year. “Reducing the risk of right whale entanglement requires immediate changes to fisheries that cause the greatest risk,” the paper says. The North Atlantic Right Whale Consortium, a group of governmental and non-governmental organizations that studies the right whale, documented that three of four right whale deaths in 2016 were from entanglement or vessel strikes.

Sean Brillant, the lead author of the Marine Policy paper and the manager of marine programs at the Canadian Wildlife Federation, said the two areas were chosen because both are among the few places where right whales most consistently go and where the seafood catch isn’t large. “The estimates we use can quantify the risks, and these seem like the most logical and the most beneficial from a cost-benefit analysis,” he said.

But members of the fishing industry expressed doubt over the paper’s proposal. “Once you draw a box you can’t fish in, it’s really hard to undraw the box,” Bonnie Morse of the Grand Manan Fishermen’s Association told the CBC, adding that the migration pattern for right whales has been changing in recent years. “If we’re doing something, we have to make sure it’s real,” she said.

Addressing the criticism that the closures may not help at all because the migration pattern of right whales is not fully understood, Brillant said, “It is indeed the case that the whales aren’t always there, but it’s a bit much to say that they’re changing their distribution.”

Scientists have only been documenting the right whale for 30 years, which is less than half of the animal’s average lifespan of the whale. Brillant said it’s more likely that the whales are in a cycle and that researchers don’t know the animal’s habits well enough yet. “The key thing that we keep coming back to is that we can’t delay acting because of a lack of knowledge,” he said. “We have to act on the best knowledge we have available.”

It isn’t just members of the fishing industry that doubt the closures would be effective. David Laist, a senior policy and program analyst with the United States Marine Mammal Commission and the author of North Atlantic Right Whales: From Hunted Leviathan to Conservation Icon, has seen several calls to close fisheries in the name of conservation be proposed and ultimately rejected. “The closures we’ve been talking about are relatively small areas,” he said. “If they implemented all of them, it might reduce the numbers somewhat but not enough.”

The proposed closures would not be permanent, Brillant said. He said researchers would study the impacts of the closures to see if those efforts were actually working. “We’re not in favour of doing things that don’t show improvement,” said Brillant. “If none of this is working, we’re happy to talk about it and chuck it if necessary.” 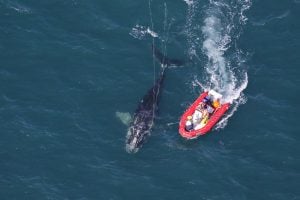