Ready up for National Moth Week 2021!

Flick on those patio lanterns, National Moth Week is underway! From July 17-25, this citizen science initiative is sourcing information on global moth species distribution. Participants are tasked with identifying and submitting their moth photos to partner organizations. The aim: to spread knowledge about moths and track local biodiversity.

Members of the Friends of the East Brunswick Environmental Commission in Central New Jersey organized the first National Moth Week in 2012. Now running with participants in 80-plus countries, the week celebrates an underappreciated and valuable sign of healthy ecosystems.

Participating “moth-ers” can expect best results at night, with an outdoor light source and a flat surface to ensure the moths strike their best poses while enjoying the light. For more creativity, moth-ers can prepare their own bait by mixing beer, brown sugar, molasses and rotting fruit. The week is a great learning opportunity for the kids, too — midsummer evenings are perfect for prying them off the screens and ushering them into the yard to spot flying creatures. Problem solved?

Moths can be as small as the head of a pin or as large as an adult human hand. While they are broadly known for nocturnal activity, some daring species are diurnal, meaning we go about our daily business together.

Even by insect standards, moths aren’t particularly likeable — provincial environment ministries have struggled with deforestation by invasive Lymantira dispar for decades, deploying defoliants in wooded war zones from Eastern Ontario to B.C. But if their being in the same scientific order as butterflies doesn’t fix your negative perception of moths as hungry pests, then this might: moths are good bioindicators for ecosystemic health. This means that with greater diversity of moth species, scientists may verify local plant species’ diversity as well. Not only that, some moths pollinate flowers alongside worker bees and are decorated with beautiful patterns!

Moth-ers may submit photos to Project Noah, What’s That Bug or BugGuide to identify them. Moth data may be submitted as photographs to participating organizations.

So happy hunting, moth-ers. Go forth and flap about! 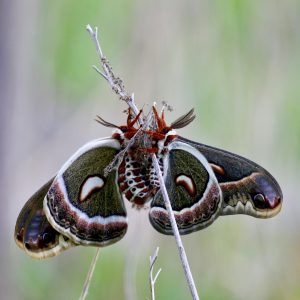 10 things you didn’t know about moths

An insect of many talents, here’s why moths are one of the world’s most underrated animals