There were no standing ovations, but the water echoed with clicks and squeals.

The audience? A group of beluga whales in Churchill River, Man., where artists gathered for a series of performances between July 4 and Sept. 7 that included everything from concerts to contortionist acts.

Artist and filmmaker Kaoru Ryan Klatt, one of the organizers of the project, says belugas “are one of the most curious animals on earth.” He hopes the project will inspire people to approach sea life with the same kind of rights that they would afford a person. “I feel that by engaging with these belugas on a level where you can exchange culture and music and art, you can start to identify with the sea life.”

“I think whales are intelligent beings,” says Jim Nollman, who was singing and playing the mandolin for the belugas. “They’re basically E.T. and we don’t really treat them that way.”

The performances are designed to allow artists to connect with the beluga whales in a creative form. Artists performed on the Canuga, a retrofitted white canoe similar to the shape of a beluga pod, as well as from an inflatable boat.

Samantha Halas, a contortionist, performed on a platform set up over the water at the side of the Canuga. “The whales were coming underneath,” she says. “It really did feel like they were interested and curious, and they kept coming back.” She says that she could hear the whales chirp when she was performing and it felt like they were cheering her on. Because her audience’s perspective was different than when she performs in front of humans, she adjusted her movements to take into account the whales’ viewpoint. “People want to connect with wildlife so badly, but in most cases the animals just want to get away,” she says. “It’s so interesting having a creature that’s almost as curious about us as we are about them.”

But Nollman says not everyone was happy with the artists’ engagement with the beluga whales. “The people who were trying to protect the whales or moderate what people do around them really didn’t know what to make of what we were doing there,” he says, adding that the authorities wanted to stop some of the performances.  The artists assured the authorities they only wanted to say hello to the whales.

The performances were filmed for a documentary, Becoming Beluga, scheduled for release in 2014. 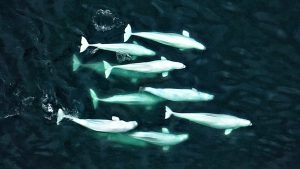