As the first national park in Canada to be established for conservation purposes, this park is one of the warmest places in the country, which makes it home to a number of rare flora and fauna species. Some of these include the rare fox snake and the endangered five-lined skink. Endangered birds like the Acadian flycatcher and scarlet tanager live here, and it’s used as a migratory stop for monarch butterflies.

In 1913, conservationist Jack Miner visited the area — at the time a naval reserve and subsequently lobbied the government to preserve the land.

“I was trying to look in all directions at once,” Miner later wrote of his visit in the Leamington Post, “as I saw the greatest variety of trees and shrubs that stand in any one place in Ontario.”

A day at the park is a relatively low-cost outdoor activity, fun for everyone. Here’s our recommendations on how to spend your day at Point Pelee National Park.

During the COVID-19 pandemic, capacity at the park is limited to ensure that everyone can have a safe visit. Arriving early (before noon, at least) is recommended — the park is open from 7 a.m. to sunset each day. We drove from Windsor, Ont., about 45 minutes away, and rolled up to the gate at about 10:30 a.m. There was a brief line to get in, but all three cars of our travel party made it through the gates just fine. It’s about $15 per vehicle to enter, but check the website for special events and alternate fees.

The marsh boardwalk is a one kilometre walkable and accessible loop through protected diverse habitat. After major renovations in the last 10 years, it’s easy to spot birds, turtles and frogs as you wind your way through cattails on the floating path. For the average walker, it takes about 45 minutes to wind your way through the marsh, stopping to climb the observatory tower or use the binoculars (although not right now due to COVID-19) along the way.

We pushed a stroller with an 18-month-old, but he walked safely for about half the boardwalk, where railings were present. The four-year-old in our party enjoyed the un-railed edges, so she could peek into the marsh looking for bugs and frogs.

Picnic at the beach

There are several picnic and beach areas, complete with pavilions, picnic tables and charcoal barbeques to set up camp for lunch or even for the day. The sandy beaches are generally well maintained and swimming is possible at some of the locations (but never swim out at the tip of the point where currents are too dangerous!).

We loaded a few coolers with snacks, sandwiches and drinks and spent a few hours at the water’s edge enjoying the sunshine. It was a great spot for the few members of our party who didn’t want to hike to the actual tip of the point, too! Most picnic and beach areas have restrooms nearby.

Walk to the tip

During COVID-19, the shuttle that normally drives visitors the 1.5 kilometres to the point isn’t operating, so die-hards have to make the round-trip walk instead. With the road closed to traffic, it’s easy walking under a canopy of trees. Some of our group stayed at the beach, but those of us determined to see the new observation tower spent about 90 minutes roundtrip.

After the 1.5 kilometres of road walking, you hit mulched and sandy paths that take you all the way out to the tip of the point. Way back in 1749, a French explorer named Gaspard-Joseph Chaussegros de Léry recorded this stretch of peninsula at 4.5 kilometres long. It’s now closer to 800 metres, sometimes as short as about 400 metres depending on the tides and water levels.

The observation tower, which opened in August 2020, is the 24-metre result of about $3 million invested into Point Pelee and offers a 360 degree view of the beginning of mainland Canada. Worth a trek up the 144 stairs if you can make it!

An oTENTik is a unique Parks Canada accommodation providing a relaxing, comfortable, and easy way to camp! A cross between an A-frame cabin and a prospector tent, there are 24 oTENTik nestled in the heart of Point Pelee, making them a great base to explore all the park has to offer.

Pelee Island is one of Canada’s best kept secrets. It’s connected to both Canada and the U.S. by ferry access only, and is the southernmost populated point in Canada. Find a bed and breakfast to enjoy a night on the island. 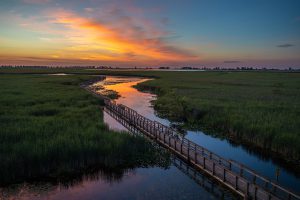 Established in 1918, Canada’s southernmost national park is a haven for wildlife and nature lovers alike