In honour of the National Bird Project, here's a selection of Canadian Geographic bird covers from the magazine's 86 years of print

However, not one of Canada’s hundreds of species officially represents the country as its national bird. That’s why last year, Canadian Geographic launched the National Bird Project to designate an official bird for Canada by 2017. Canadians cast close to 50,000 votes for their favourite birds and now, it’s down to the top five species: the common loon, the snowy owl, the gray jay/whiskey jack, the Canada goose and the black-capped chickadee.

On Sept. 19, an expert panel of judges, including Steven Price, President of Bird Studies Canada, George Elliott Clarke, Parliamentary Poet Laureate, and novelist Noah Richler, will gather at the Canadian Museum of Nature in Ottawa to debate the merits of the species they believe is most worthy of the title (get tickets here!). Then in its December 2016 issue, Canadian Geographic will announce its recommendation for Canada’s national bird. From there, it’s up to the federal government to make an official declaration.

To celebrate the National Bird Project and the upcoming debate, we’ve gathered a selection of bird covers from the Canadian Geographic archives along with their original captions from each decade the magazine has been in print.

Gannets and murres on Funk Island, northeast Cape Freels, Newfoundland. Colonies of common murres are often found beside colonies of gannets and two communities seem to live in accord with each other. (Photo: William Threlfall)

What would summer be to thousands of Canadians without the call of the loon echoing across inland lakes? But with chicks dying of starvation on acid-dead lakes, the day may come when the cries of the loon are heard no more. Robert Alvo spent four summers studying the success of loon pairs in raising young on acidic lakes. (Photo: Pam Hickman/Valan Photos)

The mountain bluebird feeds mainly on insects and berries of the boreal forest. A member of the thrush family, it is the most migratory of North American bluebird specieis. (Photo: G. & R. Grambo/Firstlight) 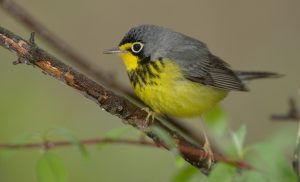 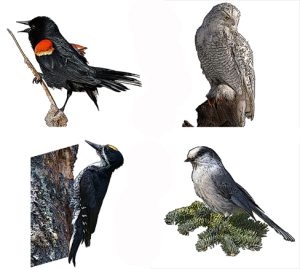