Looking for nautical clues on land

With poor conditions hampering the search on the water, Parks Canada archeologists take to the ground
By Tyrone Burke

Binoculars drawn, Thierry Boyer is on the back deck of the Martin Bergmann, getting a closer look at some wood that’s washed up on one of the Queen Maud Gulf’s unnamed islands. From a distance, it looks like it could be a plank from a ship, but when Boyer, a Parks Canada archeologist, can find no signs of fasteners, he concludes that it is exactly what it looks like: a weathered piece of wood in a treeless land.

“There are all kinds of ways that wood can end up on shore in this part of the Arctic,” says Boyer. “It could be from a ship, but without more than just the wood itself — without nails or bolts — it’s basically impossible for us to tell if it is, or which ship it might have come from. It could also be wood that was used by the Inuit, or it’s just a log that’s floated its way through the Northwest Passage.”

Scattered amid the caribou antlers, seashells and colourful granite and quartzite stones that dot the sands of many of the islands in the Queen Maud Gulf are fragments of wood. Some are just tiny slivers worn a faded grey by the relentless pounding of the water, snow and ice; others are knotty chunks of spruce, laying hundreds of kilometres from where they once stood.

With a cold north wind preventing Parks Canada’s archeologists from surveying the seas for signs of Sir John Franklin’s lost ships, HMS Erebus and HMS Terror, the team heads ashore for a hike around one of the larger islands near where the Martin Bergmann has anchored. The journey is mostly recreational, but walking along the beach, Boyer can’t help but do a little work. He picks up and examines any wood that he finds and usually discards it quickly. But when he spots a plank with nails protruding from it a few metres ahead, he quickens his pace and kneels to take a closer look. “Finishing nails,” he says, “and they’re made of iron. Because of that, we know it’s not from Erebus or Terror, no matter what type of wood it is.”

He tosses it aside and continues along the shore in the near-freezing Arctic drizzle, eyes peeled, but there will be no new clues to add to the Franklin Expedition mystery today. 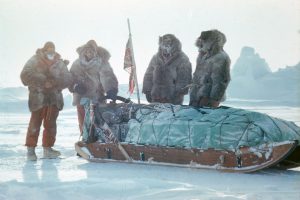