Inside the rise of hot air ballooning in Canada

Canada was slow to get on board with "the champagne sport"

One by one each pilot pulls on his starter rope and his fan sputters to life. Then the crew members lift the skirts at the bottom of the envelope while the pilot directs the cold air inside. Other crew members haul on the rope at the top of the envelope, stretching it taut.

This was the scene Don Cayo encountered in 1989 as pilots prepared to launch their hot air balloons at the Atlantic Balloon Fiesta in Sussex, N.B.. Known as Atlantic Canada’s most colourful festival, the Fiesta saw 15 balloon entries and nearly 8,000 visitors back when Cayo was covering the event for Canadian Geographic’s 1990 June/July issue.

Last September, the Fiesta celebrated its 30th anniversary and saw 30 balloons offering rides to nearly 40,000 visitors. While the sport was slow to take off in the Maritimes, Sussex has gradually become one of the best places for ballooning in Atlantic Canada, primarily because its landscape of vast farmland offers ample space for safe landings.

Although fairly recent to the Maritimes, hot air ballooning has a rich history, with the first manned flight taking place on November 21, 1783 in Paris. Upon the balloon’s descent, its pilots were greeted with champagne, a tradition that has stood the test of time and deemed ballooning as “the champagne sport.” Ballooning didn’t take off in Canada until 1840 when Louis Lauriat left Saint John, N.B., piloting a 1.5 hour flight.

Today, ballooning festivals can be found across the country, with one of the biggest being Le Festival de Montgolfieres in Saint-Jean-sur-Richelieu, Que. This festival has attracted over 500,000 height-loving individuals and over 125 balloons since first getting its start in 1984.

And—as per tradition—the landing of each balloon in Canada’s many ballooning festivals is celebrated with a glass of bubbly. As Coy says of the Marco Polo balloon landing in 1989, “Once it is packed away, [former pilot Doug Shippee] joins in the crew’s traditional post-landing champagne toast—a simple “Cheers.” 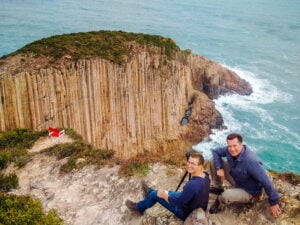 “One people, one planet, one life:” The story of a director’s chair and the Take Your Seat project

As a new book of his images is released, photographer Randy VanDerStarren explains the meaning behind his well-travelled chair