A young Ottawa Senators player received a rare opportunity to skate a different way than he normally does.

The Google Street View team paid a visit to Canada’s capital on Feb. 20 and gave 20-year-old defenceman Cody Ceci the chance to share his vantage point of Ottawa’s Rideau Canal with the world.

Ceci used Google’s Street View Trekker, a wearable backpack outfitted with 15 lenses and a 360-degree panoramic camera sticking out of the top. The device captures image that are then stitched together to create panoramic views of the site.

Although the camera was compact for the degree of footage it collects, Ceci says it was somewhat awkward to carry and swayed back and forth as he skated. But the Google team assured him the camera was sturdy and able to capture images from varying levels.

“They put a lot of thought into that camera,” he says.

As he was born in the Ottawa area, Ceci says he was honoured to skate the last one-kilometre leg of the 7.8-kilometre skateway, pushing the Senators’ mascot Spartacat as he went. “As a kid, I grew up skating on the canal with my family,” he says, adding that this made participating in the mapping of the canal even more special.

Ceci says he thinks the 360-degree view will give people around the world a great picture of the UNESCO World Heritage Site and its unique skating surface.

“It’s a cool spot and there’s always things going on,” he says. “It doesn’t feel like you’re skating on a rink at all.” 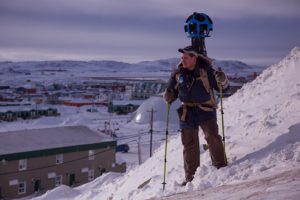 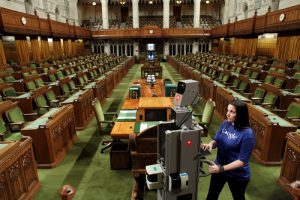 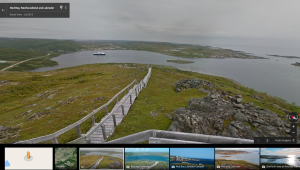 Thanks to Google’s popular Street View tool, armchair travelers can now explore three northern towns from the comfort of their desktop