A conversation with Drew Feustel, the most recent commander of the International Space Station and a dual U.S.-Canadian citizen, who returned to Earth in October after more than six months in orbit
Advertisement

On October 4, support crews pulled Drew Feustel and his two fellow Expedition 56 astronauts out of the Soyuz capsule on the desert steppe of Kazakhstan, after their return-trip from the International Space Station — a journey that takes a few minutes longer than the drive between Calgary and Edmonton. The Michigan-born Feustel, who is also a Canadian citizen, spent 197 days in orbit on Expeditions 55 and 56, serving as ISS commander on the latter mission. Canadian Geographic caught up with the NASA astronaut while in Houston, Tex., where he’s being debriefed, undergoing post-mission analysis and working to regain his strength and balance.

On being in space for months on end

That was a long time to be in orbit, but for me it was an opportunity to finally live there. My other two missions [on Space Shuttle Atlantis, in 2009, and Space Shuttle Endeavour, in 2011] — although they were highly productive and important — did not offer the opportunity for my life to exist in space for almost seven months.

Our missions last this long because of the logistics and resources currently required to send humans to space. We rely on the Russians to get there, for example [using the Soyuz rocket], but there are limitations both to the amount of time one of those spacecraft can stay in orbit and to the number of them they can build every year. Keeping each crew in space for six months reduces the number of Soyuz seats that we have to buy, but it’s also the maximum duration, approximately, that one of those spacecraft can safely stay in space. It’s all a matter of minimizing cost and maximizing productivity while we’re up there.

Feustel pictured outside of the Quest airlock during a spacewalk in June 2018. During the six-hour, 49-minute spacewalk, he and crewmate Arnold installed high-definition cameras to provide enhanced views of commercial crew spacecraft such as the SpaceX Crew Dragon as they approach and dock with the ISS. (Photo: NASA Johnson)

On commanding the ISS

It was an honour to serve as commander. I’m not sure you ever really know what kind of leader you are, except maybe based on the success of your crew and the mission — and from what I can tell, things went very well. We were happy and I truly enjoyed spending that time with my crew. I owe my success to their tolerance and support of me and the way I managed them. In the end, I was responsible for their safety, the safety of the ISS and the assurance of the mission, and I tried to perform the duties I thought were necessary to make sure that was all accomplished.

On a few of the Expedition 55/56 science experiments

Over the course of our mission we performed more than 350 science investigations. What people don’t always realize is that we don’t design those experiments, we’re just the ones that operate them. We are the hands, ears and eyes of researchers around the world. Our job might include five experiments each day, and there are times when we don’t know what we’re working on: we’ll perform tasks that are critical to the functioning of some piece of equipment, but we can’t be certain if we’re carrying out an experiment or simply taking care of some maintenance.

At times, though, we did have an in-depth understanding of what the researchers were studying. We were successful in sequencing RNA [like DNA, a nucleic acid, responsible for reading and converting genetic information] using a device not much larger than a candy bar. We were quite proud and amazed that we were able to sequence RNA over the course of just two days, putting droplets of biological material inside the device to test whether we could understand what that matter was.

Every day was a different adventure. At one point, we sent tiny satellites out into space from the Japanese airlock platform, which eventually returned to Earth after performing critical research. And we grew lettuce, grass and different weeds, which we watered and pruned day after day, taking notes on how they were doing and sending photos down. We ate a whole bunch of that lettuce.

On being a geophysicist in orbit

I didn’t get to directly apply my expertise as a geophysicist to my work on the ISS, but I was able to apply those skills to my Earth-observations, looking down on the planet and interpreting what I was looking at and why certain regions, features and systems looked the way they did.

And I’d certainly like to point out that the next commander who took over, German European Space Agency astronaut Alexander Gerst, is also a geophysicist. This is probably the first and last time in near history that we will ever see two geoscientists as successive commanders on the ISS. It’s quite a unique alignment of our careers, and we’re both pretty proud of that fact. I tweeted a shout-out to geoscientists around the world while I was in space to make the point that we make pretty good astronauts! I’m proud that we’ve had this role.

The ISS crews’ sobering view of Hurricane Florence the morning of Sept. 12, as it churned across the Atlantic with winds of more than 200 kilometres per hour. (Photo: NASA Johnson)

On what happens next

We’ll stay busy for the next year, going through all of the post-flight analysis. There are a lot of experiments on us, taking blood, looking at how our cardiovascular and nervous systems and bones are reacting. I’ll be part of a significant number of debriefs, not only with engineering teams regarding the operations of the space station, but also with the scientists on whose behalf we performed all that research — to help them make their science better or more easily accomplished in space. Then we’ll be touring around in the U.S. and internationally, talking to organizations interested in what we’ve done or for whom we performed research.

What’s amazing to me is that this process is the same for every crew. So in a few months, another group will land and they’ll start the same process of debriefs and assessments, and it just keeps going and going.

Feustel works inside the ISS’s seven-windowed Cupola as he flies over the coast of Chile. Docked just outside is the Soyuz spacecraft, which carried the Expedition 56 members home on Oct. 4. (Photo: NASA Johnson)

We got the news every single day — we could actually watch live CNN, if we chose to. And we typically would watch nightly news together while we were having meals, but sometimes we had to turn it off halfway through. Life is different up there. We were in space with a Japanese astronaut, a German astronaut, three Russians and the U.S. crewmembers, and we were often saddened by politics and disgusted by the way things are going. As you look out the ISS windows together and see the beauty of the planet, take pictures of it and send them down, it’s saddening and overwhelming to think about the great differences that we create on Earth. Those problems disappear in space, and it becomes clear that they do not need to exist.

A lot of what we do in space, essentially living together for six months in a beer can, is about tolerance for each other. No one is blameless, everyone has issues, and the only way we can get along is by having a common goal. Otherwise, we’re going to tear ourselves apart. If more people could see the Earth from space, could see the blackness of space, maybe it would change everything.

The International Space Station orbiting above Germany, Czechia and Poland, with the edge of the planet’s atmosphere — known as “Earth’s limb” — visible in the background. These are the views, says Feustel, that make the differences we create on Earth seem trivial and dangerous. (Photo: NASA Johnson)

On his dual citizenship

I like to think that being Canadian as well as American allows me to bring another country along for the ride. Canada has far fewer astronauts than the U.S., of course, so I hope that by celebrating my Canadian citizenship, we can continue to inspire even more people. A lot of what we do as astronauts is about exciting interest, giving people new goals and getting them to think about working in the space sciences — and if part of the outcome of my mission is that I can do that in the U.S. and in Canada, then that’s a very positive thing. Of course, Canadian Space Agency astronaut David Saint-Jacques is coming up right on my heels, and I hope the work I did has given him some momentum as he rolls into his mission [Expedition 58/59].

I’ve known David since the day he walked in the door down here for training, and he’s going to do a great job. He’s got the country behind him, and I know everyone is gearing up to watch him launch into space.

Feustel rests in a chair just minutes after landing in a remote area near the town of Zhezkazgan, Kazakhstan, on October 4, after 197 days in space. (Photo: NASA/Bill Ingalls)
Advertisement 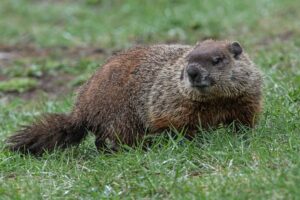 Would you trust a groundhog?