Fig travel dresses: All dressed up with someplace to see 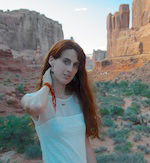 What no one ever tells you about Yellowstone National Park is that it stinks. I mean, it’s rancid. It makes perfect sense, after all, it is the caldera of an enormous active volcano that spews superheated, sulphurous liquid like clockwork. You should expect it, but I didn’t. I really didn’t.

So while I was standing at the counter of the park’s general store recovering from inhaling all that sulphur and not feeling very pretty at all, I was shocked to receive a compliment.

“You are wearing a dress,” the clerk drawled. “We don’t see many people in dresses around here. Looks very nice.”

All he got for his trouble was a blank look followed by a forced smile and surprised thank you. Honestly, I had forgotten I was in fact wearing a dress at all as I was trudging around this huge park, walking around geysers and smoking fumeroles, and dipping my feet into the park’s single swimmable hot spring at Boiling River.

The Fig Oceanic dress I was wearing was a great travel companion. Its stretchy, sporty material provided good covering of my shoulders and arms, prime sunburn areas in high elevation areas like Yellowstone. I felt like I was wearing one of my more “outdoorsy outfits.” The kind of thing designed to be outside deep in the woods where no one will see me. Most of the outfits I wear outdoors barely even match.

This is the magic of Fig’s Safari line of clothing. You may FEEL like you’re roughing it, but this Canadian designer has you looking like a city slicker who took a serious wrong turn. And true, you don’t always want to look like a city person who should be holding a latte or heading to a club, but when I’m road tripping I often do.

Wyoming may be pretty dressed down — and I admit to wearing my cowboy hat and daisy dukes while in the state – but my days were spent hopscotching between campgrounds, national park sights, elegant wilderness lodges, and the beautiful, chic town of Jackson. This dress fit in everywhere I went, and even kept me cool as it did.

One of the claimed benefits of Fig’s bamboo fiber material is that it’s great in the sun and heat. I tested this claim to pretty much its maximum extent when we decided to tackle some short hikes in Arches National Park, Utah at midday. What we weren’t aware of was the day we chose to do this the mercury was set to climb above 40 degrees. And that’s not 40 with the humidex. That’s 40 without it. In the shade.

I’d be lying if I said I wasn’t hot as I baked in the desert sun that day. My makeup even melted in our car while I was out on a hike of only 45 minutes, but I didn’t burn and the dress kept me relatively cool even though it has a turtleneck and ¾ length sleeves. The fabric flowed in a way that kept me cool, all things considered.

This dress is a great travel piece. The only criticism I have of it is the fact that it wrinkles a little easier than expected, but even with a few wrinkles, it merits addition to a traveler’s wardrobe. 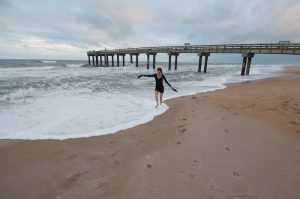