Whether it’s the old classics or classy newcomers, you’re spoiled for choice when it comes to Montreal’s Jewish food scene 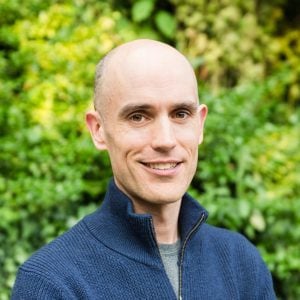 Wandering along a narrow back alley behind Saint-Urbain Street, peering over the rusty fences, it’s surprisingly easy to slip back a century — to hear the clang of feet racing up and down the spiral metal staircases between cold-water flats that once housed a dozen people rather than two or three McGill students; to feel the bite of winter seeping into the unheated rooms; to imagine the pungent aroma of condensed humanity, frying garlic, and… well.. what is that smell, anyway?

“Pickles,” says Zev Moses, a slim and earnest 34-year-old with horn-rimmed glasses. The backyard we’re peeping into, he explains, is where Esther Witenoff — now better remembered as Mrs. Whyte, the eponym of Canada’s largest pickle producer — started brining her pickles in casks from Seagram’s distillery in the 1930s. Moses, the director of the nearby Museum of Jewish Montreal, digs into his satchel and pulls out a handful of doggy-bagged Mrs. Whyte’s to pass around. “Straight from the cask,” he says, “never been in a bottle.” The burst of crisp, tangy dill in my mouth completes the feeling of sensory time travel.

I’m at the epicentre of traditional Jewish Montreal, the legendary heartland of bagels and smoked meat and — in spirit, at least — Leonard Cohen. Since the poet and songwriter died in November 2016, dutiful pilgrims have been retracing the steps between his favourite haunts, such as the Main Deli Steak House on St-Laurent. (“He sat right there,” the waitress informs me, gesturing toward the front, when I pop in for a pickled-tongue sandwich that evening. “Second booth on the right.”) It’s a circuit that, these days, draws more tourists and Toronto expats than Montreal Jews, who’ve mostly moved on to other parts of the city and beyond. The rich history of the neighbourhood is important, says Moses, whose museum opened in a former garment factory on St-Laurent in 2016. But it’s not the whole story. Jewish Montreal, he says, is in the midst of a renaissance that’s as diverse and vigorous as the community’s heyday a century ago — and as delicious, too.

The first Jews arrived in Montreal in the 1760s, shortly after the British conquest. But the wave of Eastern European immigration that begat Schwartz’s Montreal Hebrew Delicatessen and Mordecai Richler started in the late 1800s. Between 1901 and 1931, Quebec’s Jewish population mushroomed from 7,000 to 60,000, and Yiddish became Montreal’s third most spoken language. The community settled along St-Laurent, then known as “the Main,” which was the de facto dividing line between the French in the eastern part of the city and the English in the west. As we wander down the street, Moses points out reminders of its past: The Star of David engraved alongside the city’s old official flag on an ornate building once occupied by a Yiddish newspaper; the incongruously elegant porno theatre that, when it opened more than a century ago, showcased Yiddish vaudeville acts.

It’s in this neighbourhood — the Plateau Mont-Royal and nearby Mile End — that the great rivalries of Jewish Montreal linger on. Fairmount or St-Viateur? I squeezed into both places and scarfed down bagels freshly yanked just moments earlier from the wood- fired oven, savouring the distinctively sweet chewiness. Montreal-style bagels, unlike their New York City cousins, have egg in the batter and are parboiled in honey-sweetened water — and they need to be fresh. I came away a St-Viateur convert, and with a new understanding of why the city’s expats rush straight to their bagelry of choice when they return. “When there’s a holiday in Ontario, it’s crazy here,” says Saul Restrepo, who started working at St-Viateur as a 16-year-old in 1981. “People come, and they don’t order a half-dozen — they order five dozen, six dozen.”

The great deli debate — Schwartz’s or Bens — was effectively settled when Bens closed in 2006 after 98 years in business. Montreal-style smoked meat, as journalist David Sax explained in his 2009 book Save the Deli, is basically a cross between pastrami and corned beef: a brisket that is spiced according to various family recipes brought over mostly from Romania a century ago, pickled for a week, smoked, and then served in a gravity-defying heap on seedless rye with mustard. Schwartz’s is the biggest name remaining, but other iconic haunts such as the Main Deli Steak House and, a little farther afield in Outremont, Lester’s Deli offer their own subtle variations. “Lester’s is a little creamier than Schwartz’s, and it’s cut with the grain instead of against it,” explains Mélissa Simard, who has been guiding culinary safaris through Jewish Montreal for three years through her company, ‘Round Table Tours. I tried smoked meat sandwiches at all three places, and hoovered them all down with gusto. But it was from Lester’s that I chose to buy a few vacuum-sealed bags to bring back to Toronto with me on the train — no refrigeration or ice required: “If you’re comfortable,” the cashier assured me as I headed for the door, “the smoked meat is comfortable.”

“If you’re comfortable,” the cashier assured me as I headed for the door, “the smoked meat is comfortable.”

Simard’s tour also wound past some even more stubborn and idiosyncratic holdouts, including Wilensky’s Light Lunch, a diner just down the street from Fairmount Bagel where, in every respect that matters, it’s still 1932. The decor is the same; the wooden stools at the counter are the same; and the Wilensky Special, invented by the current owners’ father, Moe, is still a slab of beef salami and slab of beef baloney wrapped in a bun with a swipe of mustard then grill-pressed into the shape of an English muffin. OK, the price has changed — but $4.09 still seems like a Depression-era bargain, and with a hand-jerked egg cream soda and half-sour pickle on the side, it’s a darn good lunch. “There were tons of these places in the old days,” Sharon Wilensky says, but it’s their dogged adherence to the past that has allowed Wilensky’s to survive — which means that, just like the old days, the Special always comes with mustard and can never be cut in two. “People come in,” she says, “and they want the same thing they had as a kid, when they came in with their dad.”

Of course, as delicious as the illusion might be, it isn’t really 1932 anymore. In the years since the Second World War, Montreal’s Jewish community has continued to evolve, with a significant influx of French-speaking Sephardic Jews from North Africa and the growth of a vibrant Hasidic community. At Fletchers, the culinary space in the Museum of Jewish Montreal, the menu includes new twists on Eastern European classics, such as gefilte fish tacos; but it also has a Moroccan-style salad, and massafan cookies, an ethereal mash-up of almond flour, cardamom and rosewater that is eaten by Iraqi Jews during Passover. “Our goal is to introduce people to the diversity of Jewish food,” says Kat Romanow, a Jewish food historian and the director of food programming at the museum.

The truth is that many of St-Laurent’s iconic establishments are now Jewish in name only. St-Viateur Bagel has been owned by an Italian family since the mid-’90s; Schwartz’s is owned by a consortium that includes Céline Dion. But newer businesses that reflect the city’s changing Jewish population are springing up. At Cheskie’s Heimishe Bakery, a bustling Hasidic business in Mile End, men in dark coats with dangling side-curls line up with neighbourhood foodies for a revelatory bite of Cheskie’s chocolate babka. Then there’s the hip, industrial vibe of Hof Kelsten, where owner and Montrealer Jeff Finkelstein — who trained as a chef at famous restaurants such as El Bulli in Spain — serves up bialys and latkes alongside the lovingly crafted bread he distributes to top restaurants around the city.

To find the present-day heart of Montreal’s 90,000-strong Jewish community, though, you need to leave the Plateau behind and head southwest. On the other side of the mountain, in the Côte-des-Neiges neighbourhood, the Segal Centre for Performing Arts still hosts live Yiddish theatre. Across the road, the Jewish Public Library’s multi-lingual collection reflects the diversity of the community: Russian-language books, in particular, are borrowed over and over until they literally fall apart. There’s a boisterous musical storytime taking place in one of the rooms when I drop in, and the archives in the basement is showing off treasures rang- ing from a 1481 edition of Josephus’s Antiquities of the Jews to letters between a local Jewish community leader and Jackie Robinson, who played for the Montreal Royals in 1946. The building that the library is in also houses various Jewish community organizations as well as the Montreal Holocaust Museum, whose focus on the missed warnings of the decades preceding the war — one display features a ballot with a bold X beside Adolf Hitler’s name, one of 13 million cast in Germany’s 1932 election — feels all too topical today.

But the place that feels most like the modern incarnation of the bustling delis of pre-war St-Laurent is a few kilometres southeast of the library, near the Lachine Canal. St-Henri isn’t a Jewish enclave, but it’s an edgy, growing hot spot and where husband-and-wife team Alex Cohen and Raegan Steinberg chose to open Arthurs Nosh Bar in 2016, a tribute to Steinberg’s father that’s been billed as the first new Jewish restaurant in Montreal in years. As at Fletchers, the menu draws on the past without dwelling there: prune jam and fried onions top the old-school liver toast, and the eggs are scrambled with kale. On a Friday at lunchtime, the lineup for a table stretches out the door, and the clamour inside has none of the faintly anthropological vibe you sometimes pick up from the crowd of tourists dutifully checking out Schwartz’s.

That’s not to say you should abandon the classics. The previous evening, I’d headed to Moishes, the storied steakhouse on St-Laurent where Leonard Cohen’s family gathered after his burial. These days, a nine-storey mural of Cohen’s face, fedora’d and faintly amused, gazes down on the restaurant from a neighbouring building. Lenny Lighter, a 65-year-old whose father, Moishe, according to lore, won the restaurant in a poker game from the original owner in 1938, was having his own dinner a few tables away. The year was shaping up to be the restaurant’s busiest ever, he told us. The rib steak was bursting with flavour; the chopped liver was rich and smooth; the karnatzlach, a Romanian sausage, was suitably earthy. You could easily imagine Cohen, with his usual lamb chops and Bordeaux in front of him, jotting down verses in one of the restaurant’s darker corners.

The traditions of Jewish Montreal, in other words, are as vibrant and captivating as ever. But back at Arthurs, by the time you push aside your schnitzel sandwich and move on to a plate of syrniki — cottage cheese pancakes drenched in maple syrup — you’ll be ready to start adding some new traditions to the circuit. 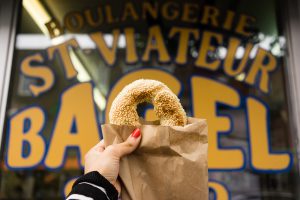 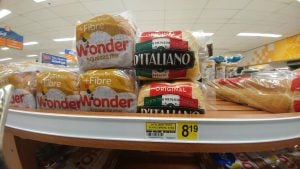 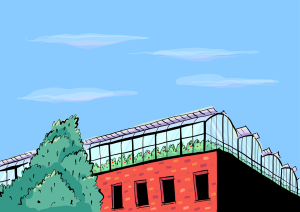