Diary of a northern explorer

He was an ottawa steamfitter turned missionary hardened by his time in the North, which made W.H.B. “Billy” Hoare the logical choice when the Canadian government needed to establish the boundaries of a new 39,000-square-kilometre preserve straddling the boundaries of present- day Northwest Territories and Nunavut.

Until now, though, the story of Hoare’s 1928 journey across what is now the Thelon Wildlife Sanctuary (then the Thelon Game Sanctuary) has remained largely unknown — something McGahern-Stewart Publishing hopes to remedy with the March release of Thelon Odyssey, a reprint of the diary Hoare kept while travelling across the immense and, at the time, poorly mapped landscape. (Hoare’s daughter, Sheila Thomson, self-published part of her father’s diary as Journal of a Barrenlander in 1990.)

Hoare wasn’t a novice when it came to northern exploration. After establishing an Anglican church in Aklavik, N.W.T., in 1920, he spent three years on a government assignment, tracking caribou 7,000 kilometres by dogsled, foot and canoe across the Barrenlands.

In the winter of 1928, Hoare and A.J. Knox left Fort Reliance on Great Slave Lake and ventured across the harsh terrain that had claimed the life of English explorer John Hornby a year earlier. With three tonnes of supplies, Hoare and Knox fared better, covering 500 kilometres by dogsled and canoe before finally reaching what would become known as Warden’s Grove on the Thelon River in October 1928. Their toil marked one of the last unsupported adventures in the North before airplanes made traversing its expanse easier and changed exploration forever.

“As a linked account of sustained, arduous wilderness travel requiring extraordinary skill and resourcefulness, Hoare’s journal stands out distinctly among all northern travel literature,” says co-publisher Hugh Stewart. As much as Hoare’s brief annotations leave the reader begging for more detail, they speak volumes about “the physical, emotional and mental energy required to get through the day alive,” adds Stewart. “In such situations reflection is an unaffordable luxury.”

Friday November 2nd, 1928 . . On return trip from Grove rapids to Camp #1 Thelon river
I was up just as it started to break light. Thawed out the stew . . added more snow to it and had breakfast . . then took a walk over the hills and in 10 minutes struck the meat cache that was half way across the Grove rapid portage. I soon returned with the dogs and started to break open the cache. To get the meat was a more difficult task than one would imagine. The meat was frozen in one solid mass and it took until 11.30 to get out what I needed and to rebuild the cache. I then proceeded to the cache of goods at the foot of Grove rapids . . got out the 50 lbs of rice, 25 lbs of tallow, some odds and ends that we needed and my suitcase containing stationery, instruments and photo material . . After rebuilding this cache I went a mile to a small patch of spruce, made fire, thawed out enough meat to give the dogs a feed . . cooked a stew . . had a meal and filled a thermos bottle then proceeded across Radford & Street lake [Hanbury Lake] to outlet. There I had to make a two mile portage to get around the rapids. At the foot of the rapids I tried to stop the dogs on the crest of the 50 foot slope but the sled bumped into the wheel dogs and started the whole team racing down hill to the very treacherous looking ice at the foot of the rapids. At the edge they broke through shell ice . . went into water but there was another thickness of ice 8 inches below, so the dogs kept on until they reached solid ice in the centre. There I stopped them and went to test the ice along the opposite shore as there was open water 500 yards below us. Along that shore also [were] two thicknesses of ice with a layer of water between them, but the top layer of ice seemed a bit stronger than the other side. I stepped to the edge of the sandwich ice to test its strength with the ax, my both feet slipped at the same instant and shot forward and [I] lit on my back about the center of the sandwich ice with such impact that the top layer was broken and I found myself in a foot of ice cold water with only my head & chest unsubmerged. Scrambling out with all speed I returned to the dogs and drove them rapidly across the sandwich ice about half way between my swimming hole and the open water. The dogs got across alright but the sled broke through right at the shore. It was the work of an instant to get it out and I proceeded with all speed a mile up a hill until I found suitable building snow near the crest. I immediately set to work to build a small snow house. By this time my clothing from the waist down and on my whole back was frozen stiffly so that I was much impeded in my movements and it took me more than an hour to complete the snow house. I kept from freezing by eating raw deer tallow every few minutes. Soon I was rolled up in my sleeping sack and the sled cover and got warmed up by eating tallow and sipping hot Stew from my thermos bottle from time to time . . The heat of my body during the night dried out my clothing somewhat but my outer foot wear was still frozen so that I could not get it off. About 7 miles today with dogs

Saturday August 30, 1930 . . Relaying Supplies to Thelon R
The wind became quite slack this morning so I loaded two canoes with supplies and gasoline and as my natives did not return at noon I started for the west end of Schultz lake . . in one place, I ran on a reef and cut the propeller shear pin . . when I repaired it I went on and made tea as soon as I got into the main body of Schultz lake . . in crossing a deep bay the wind was side on and a sudden squall came up and swamped the canoe I was towing . . It capsized spilling everything out . . It contained all my food supplies and part of the natives’. The supplies belonging to the department lost so far as I can remember are 100 lbs sugar, 2 cases milk . . 1 case sausages, 1 case c. beef . . 150 lbs bacon, coffee? . . baking Powder. 30 lbs lard . . 2 axes. Candles. Amunition . . Engine Spares. 1 drum (gas 15 gal) . . 1 primus stove. shovel. 1 case c. fruit. 25 lbs rice. 15 lbs barley

I tried to right the canoe but was unable so had to tow it to land. I could not approach the nearest land because of the wind so had to run before it for about 3 hours until I could get shelter enough to turn in. I had to get wet to the waiste getting the capsized canoe to shore and emptied . . set up my small tent which fortunately was not in the canoe that capsized . . wind quite strong at night . . The loss of the sugar bacon lard, milk candles and all my food supplies is very serious and will handicap me very much

Sunday August 31st 1930 . . Relaying supplies to Thelon
Wind and rain during the night . . This morning the wind swung to east and left the coast exposed so I had to move the canoe down about two miles to a sheltered bay. I walked back to camp and it began to rain, raining steadly all day . . I spent the day [in] bed reading

Monday, September 1, 1930 . . Relaying supplies to Thelon
Driving rain and wind most of night and rain until noon today but east wind dropped at 7 A.M. It seemed best for me to go back to the head of the river to get the bacon and other supplies that I cached there so I got away at 9.30 inspite of the rain . . Shortly after the wind changed to west and I had a fair wind until I rounded the sharp bend to the North then I had a side wind which drenched me with spray and kept me busy baling the canoe. I arrived at the Camp at 1.30 P M. to find the native back with his father and mother inlaw and six others. As I suspected he had decided to go no further with me and gave one excuse after another. The real reason seems to be that the native who went with Knox failed to return and the department did not do anything for the parents of his brother who was drowned. I managed to persuade him to let me have one dog out of his two which cost $20. and paid him off. The wind became a north west gale by night. Three other natives arrived at night. I tried to get one of them to work for me but they do not wish to adventure into strange country 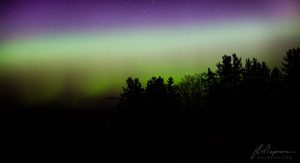 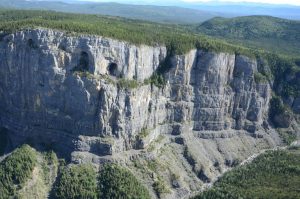 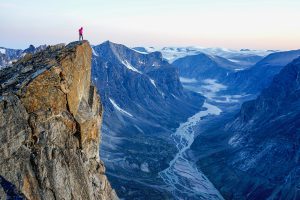 On its 90th anniversary, Canadian Geographic presents the 90 most influential explorers in the nation’s recorded history