David Bird was born to be an ornithologist—and not just because of his name. An emeritus professor of wildlife biology and former director of the Avian Science and Conservation Centre at McGill University, Bird has acted as a consultant editor for DK Canada’s Birds of Canada, Birds of Eastern Canada and Birds of Western Canada.

Here, he shares his excitement over his latest book: Pocket Birds of Canada.

What role did you play in producing Pocket Birds of Canada?
As a consultant editor, I made sure everything in the book was factually correct and that there was enough information in the book for each bird to be able to identify them. The birds are arranged in a specific order according to the latest taxonomic studies done by experts.

How would you describe the book?
It’s an ideal book for birdwatchers in Canada. It’s a great book to take into the field, to put in your jacket pocket and identify any one of the 434 species of birds normally found in Canada. What I really like about this guide is that it has a range map beside each account, so you know instantly when you see a bird if it’s found in your area or not.

What is it about birds you find so captivating?
Birds offer variety. They’re kind of like collecting coins or stamps in that way. It’s a very inexpensive and relaxing hobby, so all you need really is a device that brings the birds in close, like a pair of binoculars or, if you want to get fancy, a scope. All you need then is what I would call a list of “usual suspects”. And that’s exactly what Pocket Birds of Canada is. It’s a list of usual suspects.

Why are birds important?
Everybody knows that our wildlife around the world is disappearing and the birds along with it. Something like 12 per cent of the world’s 10,000 bird species are in danger of going extinct. Birds are easier to count than other species, so they become a really good reminder of what’s going on in our environment in terms of climate change. Birds are like a barometer of how our wildlife and environment is doing.

What are your thoughts on the RCGS’s National Bird Project?
The main criteria for selecting the National Bird of Canada should be that it hasn’t already been chosen as an official bird for something in Canada. That takes out the Snowy owl, which is Quebec’s bird, and the Common loon, which is Ontario’s bird. The Gray jay is a fresh new face that is found in every province and territory in Canada. It stays in Canada all year round and is a friendly, smart bird. What could be more Canadian than that? And the colours aren’t flamboyant; they’re reflective of what Canada is all about.

Vote here for the species you think should be Canada’s national bird!

*This interview has been edited for brevity and clarity 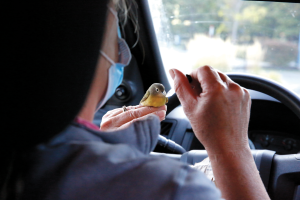