The romantic image of an angler standing thigh deep in a river, rod arcing above his head, the silver flash of salmon at the end of the line, still draws many to Quebec’s rivers.

But just a decade ago, the popular pastime of fishing in the province’s waterways was almost a memory, and it remains tenuous as Atlantic salmon numbers continue to raise concerns about the species’ health in the province.

Although there was an eight per cent increase on the five-year overall average of large Atlantic salmon that returned to Quebec’s rivers in 2013, the number of grilse — salmon that spend only one year at sea before returning to spawn — suffered a 47 per cent decline.

Jason Carr, the executive director of research at the Atlantic Salmon Federation in St. Andrews, N.B., says that’s a worrying rate of return for a fish that acts as a genetic insurance policy for the entire salmon population.

Grilse and multi-winter salmon hatch from the same clutch of eggs and carry the same genes. The only differences are their size (grilse are smaller after one winter at sea) and feeding habits. It’s the latter category that acts as the species’ insurance policy. Because grilse feed separately from larger salmon during that first winter, if something were to devastate either group while at sea, the unaffected salmon would still return to spawn, ensuring the population isn’t decimated.

Predation, the spread of disease from escaped farmed salmon, lack of food and ocean temperatures all have an impact on the fish. Carr says it’s difficult to assess the reason for the low grilse returns in Quebec because a salmon’s life in the ocean isn’t well understood. Still, he has a hunch that rising ocean temperatures are affecting the salmon’s food sources, requiring the grilse to spend another year at sea to grow big enough to spawn, and thus weakening the genetic safeguard effect.

But Carr notes there is still a lot of research to do before drawing any firm conclusions, and cautions that it’s important to look at the long-term trends. “Sometimes you will have fluctuations,” he says. “We really should be looking at what happened in the past What was the ratio of salmon to grilse 30 or 40 years ago?”

Carr says the federation will be watching this year’s returns in Quebec closely, and that new tracking research may demystify some of the salmon’s life in the ocean. Meanwhile, he says, a simple way to help the species is to recognize that it’s important as part of a complex ecology and to the tourist industry. He says with better control of fish farms, promoting live-release fishing and more research, “We’ll be able to maintain this iconic species for generations to come.” 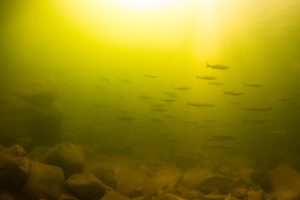