Captain's log: The 2014 Victoria Strait Expedition comes to a close

September 18, 2014, 20:30 Mountain Standard Time
This was our final day of operations, and this time there was a hard deadline. By 3 p.m. we needed to start heading for Gjoa Haven. Tomorrow morning we will rendezvous with the M/V Avataq, a commercial vessel that will transport the Investigator south. Timing the shipping of cargo in the Arctic is critical. The ice this year is similar to the normal ice patterns we experienced a few years back and we have to watch closely. Over the past several years, we’ve been relatively ice-free in this area, but the ice is moving in early this year.

Our crew has been pushing hard over the past month, and with only a day left to go it’s more important now than ever before that I remind everyone aboard to be safe and not to let our guard down in all the excitement.

The Investigator was off as soon as our morning brief was over, and final dive operations by the Parks Canada’s underwater team were conducted up until mid-day. The Canadian Hydrographic Service launches Gannet and Kinglett also finished up their multi-beam surveys of the ship, and I must admit that even the three-dimensional raw data is very impressive. I can’t wait to see how it looks after it’s been post-processed.

Helicopter operations were also underway again today as hydrographer-in-charge Scott Youngblut headed out to take down a GPS station he had previously installed. Archeologist Douglas Stenton and pilot Andrew Stirling joined him, and spent the time working on additional land-based surveys. I worried about sending them out together again — the last time they went out together caused a lot of excitement.

As all the launches returned, I had a final photo taken from the helicopter of our little Sir Wilfrid Laurier squadron. Once done, we loaded up the boats and steamed away. I left with mixed feelings in having to shut it all down. I gauged some of the keys of our success: all of our assets, including helicopter, survey launches, an AUVs and an ROV, all performed efficiently with no downtime — a testament to our engineers and technicians; and we had no accidents or injuries — a testament to our professional crew. We stuck to our plans, both short and long range, and flipped our plans south when the ice sent us there. My crew was amazing. It doesn’t get any better than this.

Tomorrow, once we discharge the Investigator to the Avataq, we will sail to Cambridge Bay to discharge Gannet and Kinglett to another Canadian Coast Guard icebreaker, CCGS Terry Fox, which will carry them south to Newfoundland.

To search each year since 2008 has been a logistic and environmental challenge every step of the way, especially considering the narrow window that nature allows us to search. What a dream to find one of the lost ships on my watch. Thanks so much to everyone who helped us to be part of this story. I will be closely following the work on this vessel for years to come, and am more interested now than ever before to see what stories the vessel will tell and what mysteries it will solve. Clearly, I am going to need a much bigger nautical history bookshelf.

Fair winds and following seas everyone. 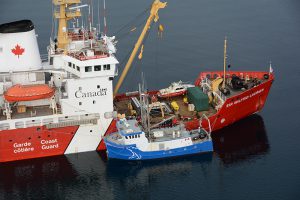