In the polar science community, Martin Bergmann (above) is a household name. As director of Canada’s Polar Continental Shelf Program (PCSP), he coordinated logistics for researchers working in the Canadian Arctic, managed a network of more than 1,600 landing sites for planes that criss-crossed the northern skies and doubled the size of the PCSP facility in Resolute Bay, Nunavut.

To many of those who attended the International Polar Year conference in Montréal in April, Bergmann, who was killed in a plane crash en route to Resolute Bay in August 2011, was the person who made their work possible. His contributions were honoured at the conference during a ceremony inaugurating the Martin Bergmann Medal, which recognizes extraordinary achievement in polar science and will be awarded annually. Sheila McRae accepted the medal on behalf of her late husband.

As director of the PCSP, Bergmann, 55, left a legacy that was embodied in the conference slogan, “From Knowledge to Action.” “I know of no one who was better at taking ideas, taking knowledge and making things happen than Marty,” said Peter Harrison, former vice-president of The Royal Canadian Geographical Society and conference chairman, in an emotional speech to an audience of Bergmann’s family, friends and colleagues.

Harrison said he has witnessed first-hand how the PCSP facility provides everything from meals and accommodation to flights to and from Resolute Bay but noted that while the projects Bergmann coordinated throughout his career were important, his real legacy lies in the connections he forged. “You are a very special group of people,” he said. “You are 0.01 percent of the people who knew Marty. You are 0.01 percent of those whose lives he affected.”

To make a donation in Bergmann’s memory , visit www.cfo-fco.ca. 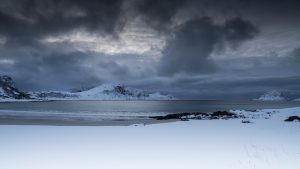