5 ways to experience Squamish, B.C., the eagle capital of the world

Stunning scenery, craft beer — and eagles by the hundreds

Did you know bald eagles make great parents, or that they mate for life but take separate vacations? It’s the kind of information you find yourself sneaking into conversations after a trip to Squamish, B.C. That’s because along with glorious mountain views and intimate craft drinks, you’ll remember the eagles that congregate by the hundreds here during the winter months. Here are five ways to experience both this outdoorsy town and its iconic bird.

An easy way to spot the town’s overwintering eagle population is to take a walk along the Eagle Run Dyke, situated on the Squamish River and across from the 755-hectare Brackendale Eagles Provincial Park. On winter weekends (November through mid-January), volunteers from the EagleWatch Interpretive Program set up under a viewing shelter, where you can peer through their high-power spotting scopes and ask questions about the eagles and their environment.

Plan a self-guided day of eagle-watching by checking out the handy Eagle Viewing Sites map from Squamish Tourism, which lists the spawning channels of the Tenderfoot Creek Hatchery, the marshes of the Squamish Estuary and Spit and the confluence of the Cheakamus and Cheekye rivers among prime viewing spots. (They don’t list the city dump, however, where eagles can also be found as the birds have adapted to this food source — see “Beyond the beauty,” below.)

Grab a coffee and a bowl of salmon bisque at the one-of-a-kind Brackendale Art Gallery, home base for the Brackendale Eagle Festival, which runs throughout January. Gallery owner Thor Froslev helped popularize Squamish’s moniker of “world eagle capital” after a count of 3,769 eagles in 1994 (there were 1,157 in 2019). At the gallery you can see the blackboard with the numbers from the annual eagle count, along with eagle photos for sale.

Besides the scenery (and the hot chocolate shared en route), a float trip along the Squamish River is a serene way to experience the landscape and view eagles up close. It won’t take long to spot your first eagle — perhaps an adult pausing on a dead tree overhanging the river against a backdrop of snowy peaks and blue skies. www.canadianoutbackrafting.com, https://squamish-rafting.com

The brewmasters at Howe Sound Brewing turn their talents at this time of year to the creation of a special release for Eagle Watch and the Brackendale Eagle Festival. The last one? The Bald Eagle Session IPA, with bright fruit aromas and notes of fresh pine. Even if they’ve run out, you can find something to your liking at this established craft beer maker, with Squamish-centric beers on tap and a cozy pub to boot. Cheers to the eagles!

While bald eagle numbers have recovered since the United States and Canada banned the use of DDT pesticides (the chemical caused eagles to lay eggs with thin shells, resulting in a population crash), the species is still not completely in the clear. The biggest threat, again?

“Humans,” says Dr. Judith Knapp, a long-time volunteer with Squamish EagleWatch. The list of hazards comes easily to her: pollutants in the water, sea lice from fish farms infecting salmon fry, drone use scaring the birds, declining salmon populations. “Without salmon, you’re not going to have eagles.”

It’s a sign that at a recent annual count, the greatest numbers of eagles were spotted feeding at the dump, not at the traditional salmon streams. All these factors add up, Knapp says, noting that only one eaglet in 10 reaches adulthood. But it’s her passion for these unique raptors that continues to motivate her efforts and the volunteers of EagleWatch.

“They’re just not like other birds,” she says. “They fly so fast. They’re independent. They’re very passionate about their young and their mate. They’re just awesome!” 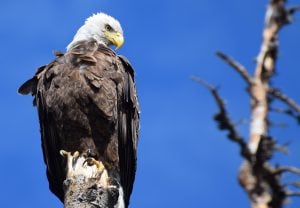 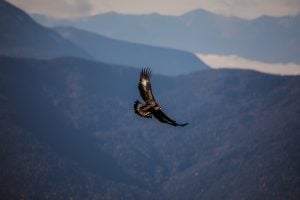 No one knew golden eagles in the Yukon and Alaska migrated along the Rockies’ front ranges, until an avid birder noticed something strange