Your weekly CanGeo round-up of wildlife news
By Can Geo Staff
July 13, 2021 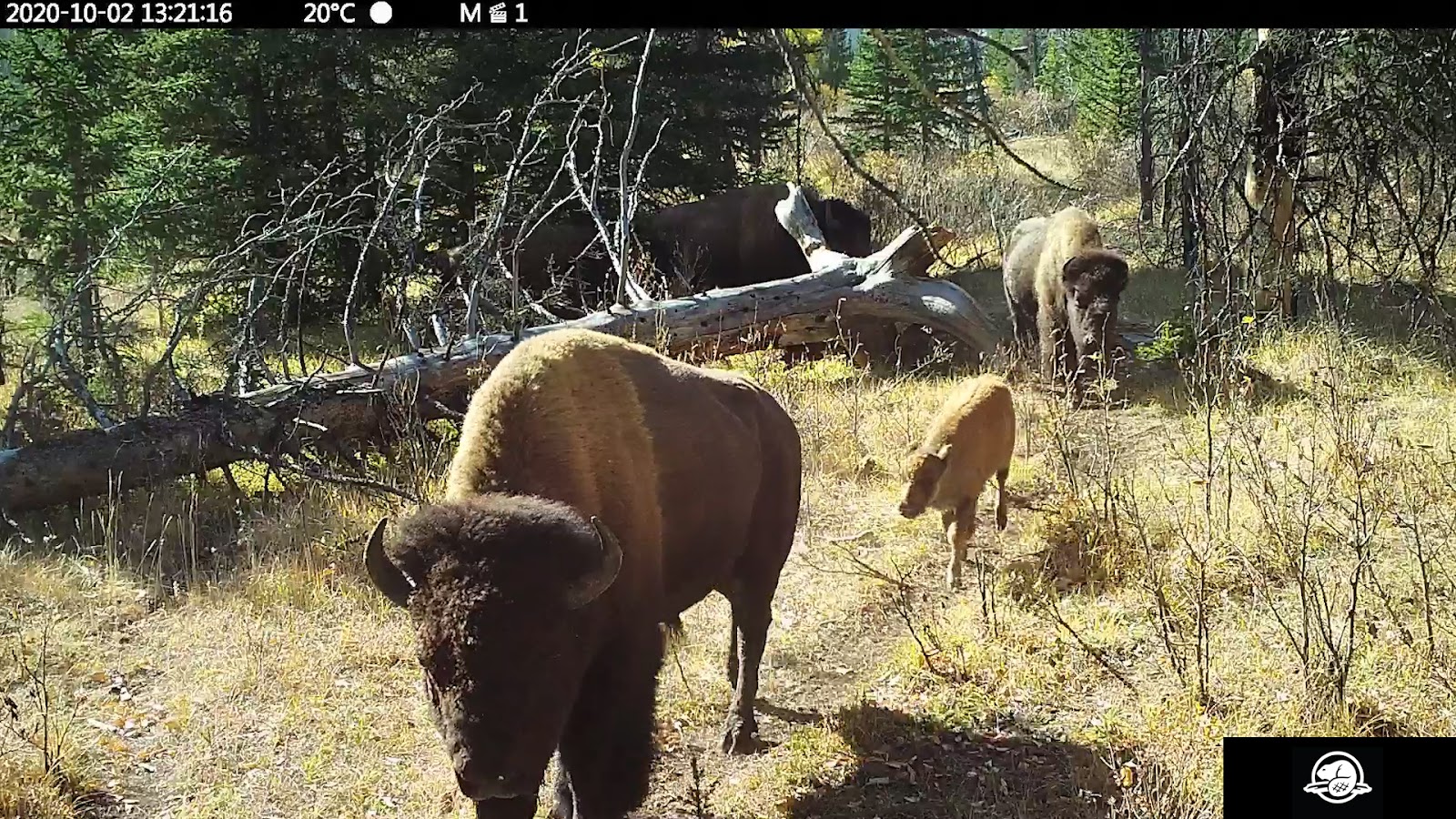 Western Canada spent the last week baking in record-high temperatures — and Banff National Park has had a few buns in the oven of its own. Initial reports suggested that a baker’s dozen of fresh bison calves were the latest additions to the recently-introduced herd. By Monday morning the count had grown to 16. The baby boom is great news for the Banff Bison Reintroduction Project, which started in 2017 with the aim of reintroducing wild plains bison to the park over a five-year period. Park officials say the herd's annual growth rate is now topping 30 per cent, indicating the herd is healthy. With 16 new calves frolicking freely across the landscape, the herd now stands at 63 animals — up from the 16 bison originally introduced in 2017. Prior to reintroduction, the area hadn’t seen bison in 140 years — a fact that may be contributing to their current success, as wolves appear to be unfamiliar with hunting the burly bovines. There hasn’t been a single mature bison death so far, with only one young bison killed last year by wolves. Park officials are hoping for another year of safety for this year’s batch — with many more baby booms ahead. 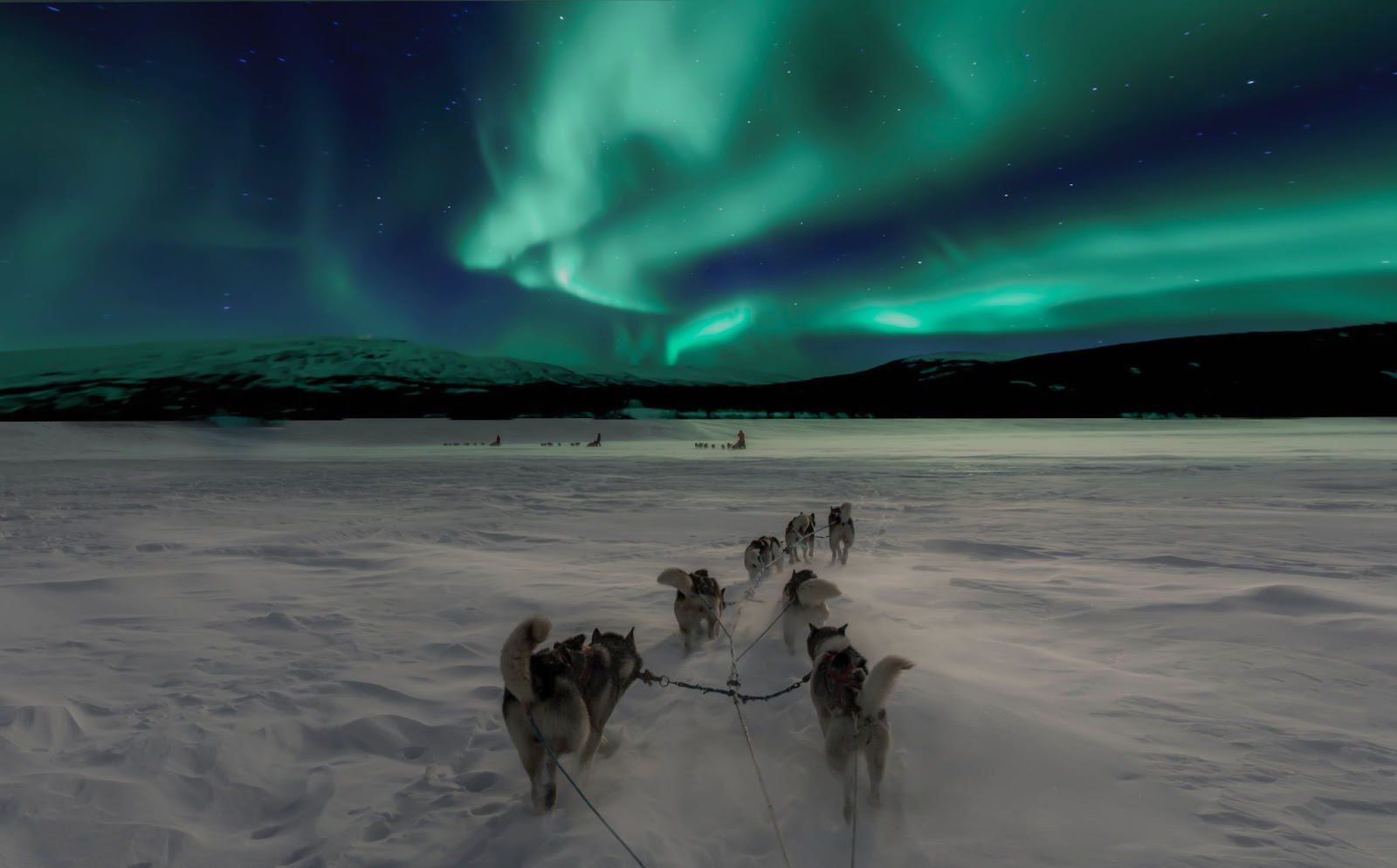 It’s a dog’s life. A 17th-century sled dog’s life, to be exact. And researchers, led by the University of York, are learning lots about these working dogs through their 17th-century feces. Proteins extracted from palaeofaeces (ancient feces) that have been preserved in permafrost are revealing lots of interesting dietary — and sociological — information about our ancestors and their animals. It turns out that sled dogs at the Nunalleq archaeological site near Quinhagak, Alaska, mainly ate muscle, bone and intestines from a range of salmon species, but the researchers also found bone fragments from other dogs in their feces. “The lives of dogs and their interactions with humans have only recently become a subject of interest to archaeologists. This study of their dietary habits reveals more about their relationship with humans,” says lead researcher Anne Kathrine Wiborg Runge. The Arctic dogs would have relied exclusively on humans for food during the winters, but may have been fed less frequently in summer or set free to hunt for themselves. Working dogs require around three kilos of protein a day so feeding them would have been a major undertaking for past Arctic cultures.

Too hot to handle 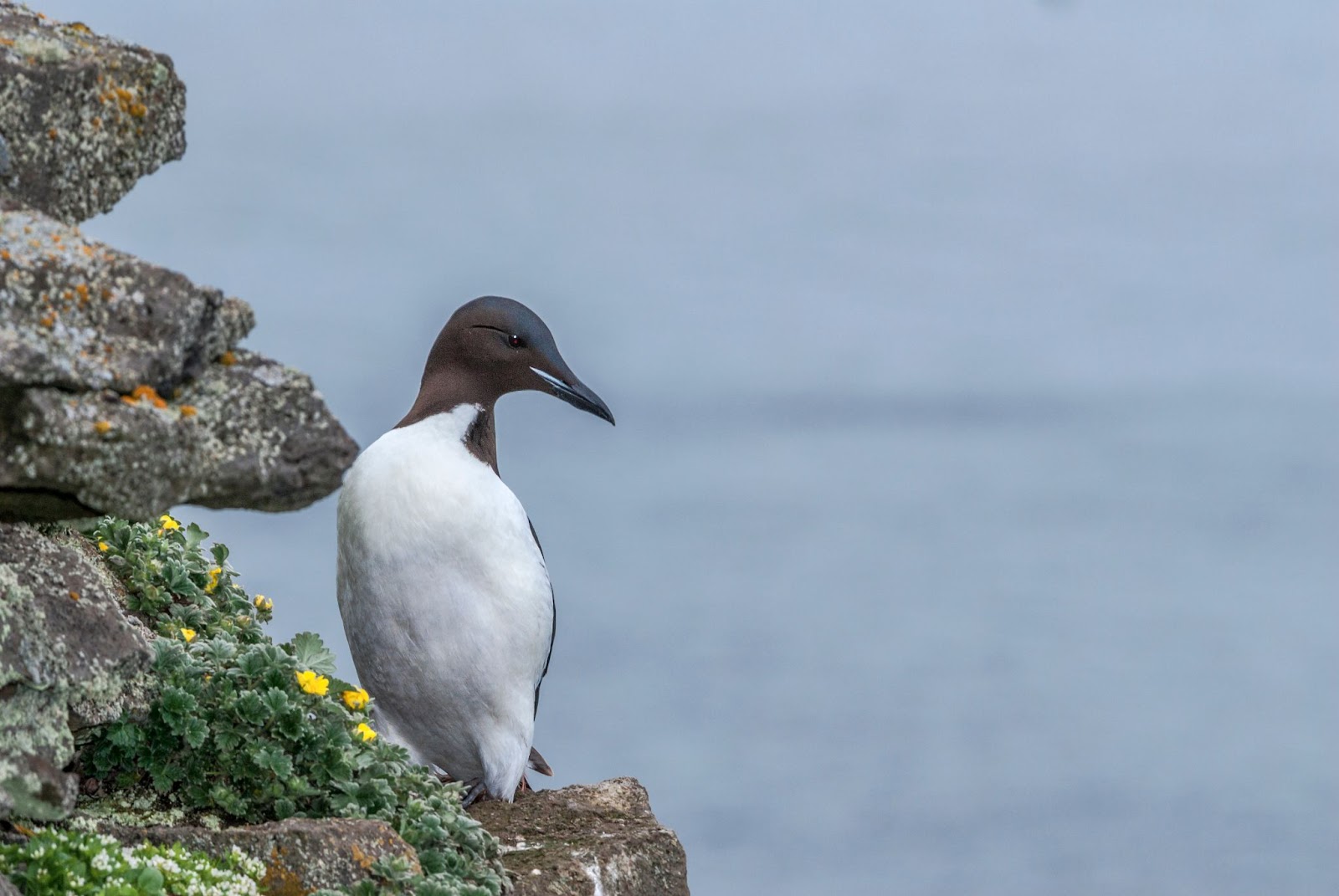 The Arctic is warming faster than anywhere else on the planet. This is especially bad news for thick-billed murres — large Arctic seabirds — which are particularly vulnerable to rising temperatures, according to a new study from McGill University. In an attempt to explain reports of heat-related mortalities, researchers led by Royal Canadian Geographical Society fellow Emily Choy trekked to the cliffs of Coast Island in northern Hudson Bay. After studying a colony of 30,000 breeding pairs, the team found that the murres had the lowest cooling efficiency ever reported in birds and that they started to suffer from the heat at temperatures as low as 21 C. This is largely due to their high metabolic rate relative to their size. When they pant or flap their wings to cool off, they expend a high amount of energy — which only produces more heat. Nesting behaviour is also a factor, with dense colonies of birds breeding on tightly-packed, sun-exposed cliff edges. The researchers also found that larger birds are more sensitive to temperature increases than smaller birds. The study is the first to examine heat stress in large arctic seabirds and is one of the first studies to explore the physiological effects of warming temperatures on Arctic wildlife. 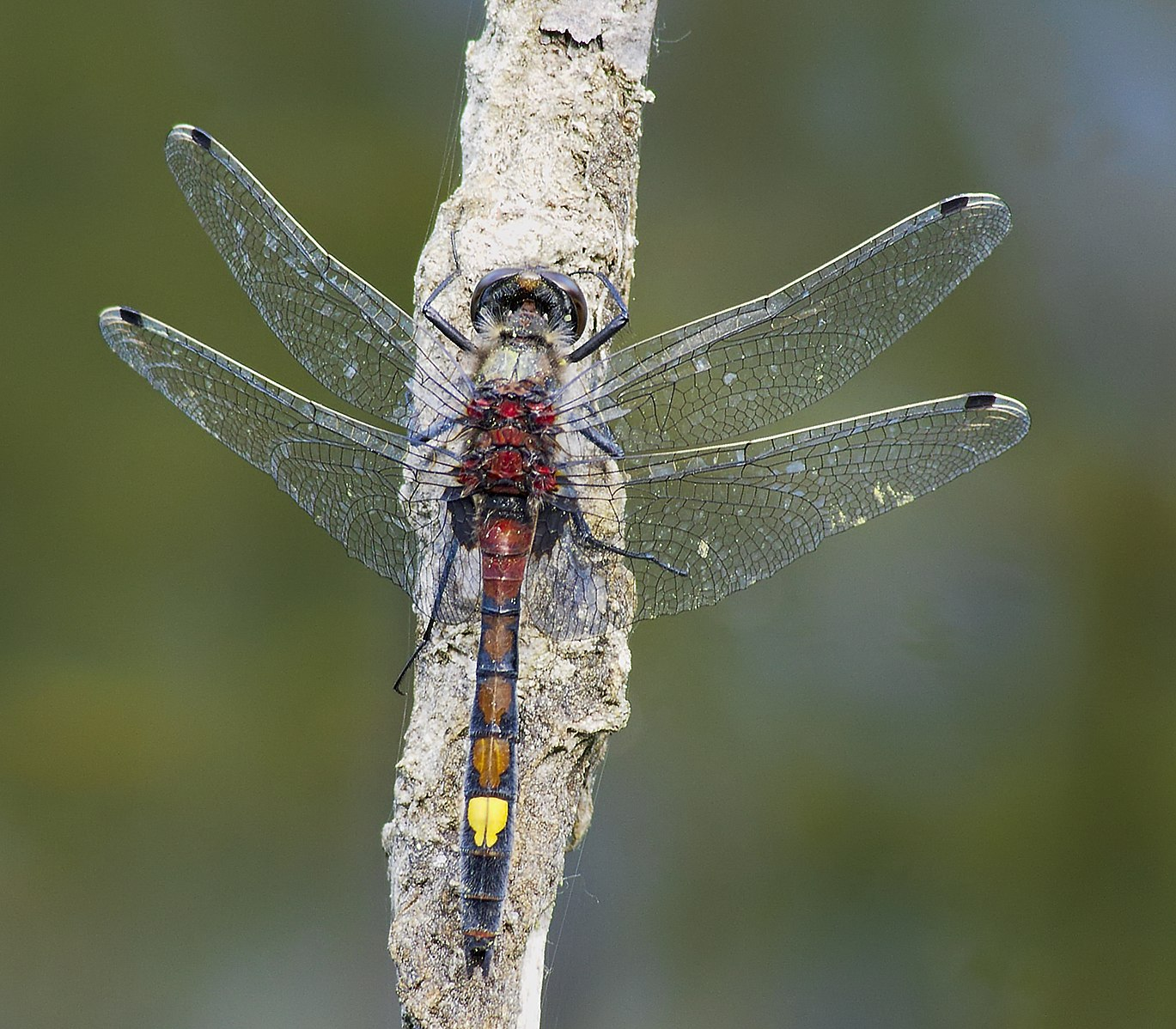 Male dragonflies ditch their wing “bling” to beat the heat, according to new research. Dragonflies normally benefit from eye-catching darker pigmentation in their wings as a signal to future mates and as a warning to their foes. However, a new study in the Proceedings of the National Academy of Sciences finds that male dragonfly wing pigmentation evolves in response to the climate — to the point that it may be one of the most predictable evolutionary responses ever observed for a mating-related trait. By assessing nearly 3,000 individuals from a select ten species, researchers concluded that male dragonflies almost always evolve to lighten their wings in hotter climates compared to their counterparts in cooler times and places. Female dragonflies, however, do not show the same variation as their male counterparts — suggesting different sexes do not always respond to climate change in the same way. Dark-black wing pigmentation can result in a body temperature increase of roughly 2 C — and with global temperatures trending upward over the next few decades, dragonflies may have to “lighten up” to thrive in hotter climates. However, there’s a catch: if males change their wing bling too much, females may have trouble identifying the correct species to mate with!

Carving out a future for western redcedar From the dugout canoes of the Nuu-Chah-Nulth, to the totem poles of the Haida, to the longhouses of the Tlingit, the western redcedar is more than just a tree to the people of the Northwest Coast First Nations. It is a resource of great cultural importance, often called “the tree of life”. However, new research in the Journal of Ethnobiology has found that the western redcedar growths suitable for traditional carving are as rare as they are iconic. The declining abundance of these trees has been largely attributed to logging — with the larger growths used for carving community canoes nearly extirpated. In response, the five First Nations of the Nanwakolas Council of British Columbia and Simon Fraser University have undertaken a collaborative research project in an effort to conserve the western redcedar tree. Their approach combines traditional ecological knowledge with scientific research. Guided by community leadership, the interdisciplinary team carried out interviews with traditional wood carvers and conducted fieldwork with stewardship workers. The research is contributing to new forest stewardship policies focused on cedar conservation — and is now being implemented through First Nation laws and subsequent agreements with forestry companies.