David Boyd, a Canadian environmental lawyer and UN Special Rapporteur on Human Rights and the Environment, reveals how recognizing the human right to a healthy environment can spur positive action for the planet
By Alexandra Pope
June 5, 2020

David Boyd has built his career around a simple belief: that people, no matter where in the world they live, have the fundamental right to a safe, clean, healthy environment.

Boyd is an environmental lawyer and associate professor of law, policy and sustainability at the University of British Columbia. He was introduced to the connection between the environment and human rights some 30 years ago through the writings of David Suzuki and the work of Antonio Oposa, a litigator who in 1990 successfully sued the Philippines government on behalf of 43 children to stop deforestation around their village. Since then, he has written nine books on the subject of environmental rights and has been a leading voice in the movement to get Canada to recognize those rights.

Now two years into a three-year appointment as United Nations Special Rapporteur on Human Rights and the Environment, he is drawing on his optimism about our shared future to encourage countries around the world to recognize and protect their citizens’ environmental rights, and take action on the most urgent environmental issues of our time.

On the status of environmental rights around the world

Read: David Suzuki on why Canada needs an Environmental Bill of Rights

On how COVID-19 has changed the conversation around environmental rights

The interesting thing about COVID-19, which connects it to climate change and to the global emergency of biodiversity loss, is that all of these problems have the same root cause: our dysfunctional relationship with the natural world. We're in the midst of the pandemic right now, so it's really important for us to deal with this public health crisis, but we also have to invest in preparing for future pandemics. That means changing the way we deal with deforestation, changing our agricultural systems and what we eat, ensuring that our water, air and soil are clean. We’ve seen rollbacks in environmental protections in Ontario and Alberta as a result of the pandemic, but we should be strengthening our environmental laws and policies at this point in time, not weakening them.

On how rights can lead to action

Strengthening environmental laws is necessary from both an environmental and a health perspective. When you recognize the right to a safe, clean, healthy and sustainable environment, that can be a catalyst for all kinds of positive changes to address not only pollution, but also climate change and biodiversity loss. We're seeing that in countries around the world where the connection between human rights and the environment is recognized. For example, in the Netherlands, they just closed down a coal-fired power plant because of a recognition that Dutch greenhouse gas emissions were too high and had to be reduced. And in Colombia, there was a court decision last year saying that deforestation in the portion of the Amazon rainforest that lies within Colombia was a violation of children's right to a healthy environment. 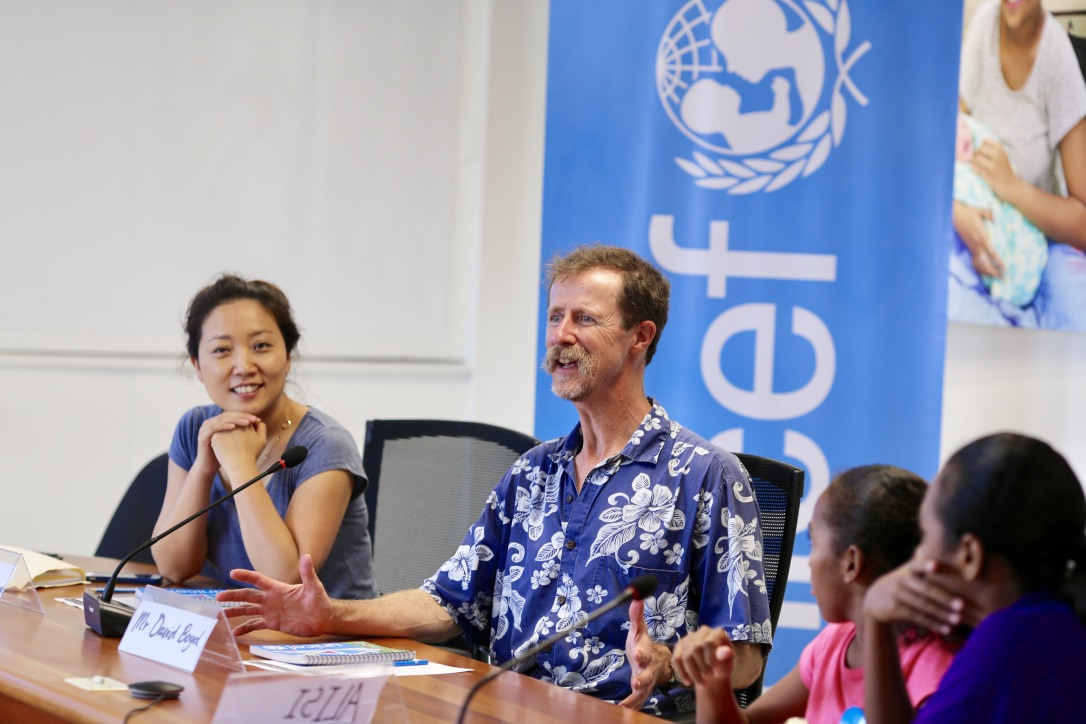 David Boyd speaks with Fijian youth during a UN mission to the island nation, which is facing major environmental challenges due to climate change. (Photo courtesy David Boyd)

On how Indigenous Peoples are leading the fight for environmental rights

As the world moves forward on protecting biological diversity, governments all over the place are recognizing that not only is it important to consult with Indigenous Peoples and have their free, prior and informed consent pursuant to the UN Declaration on the Rights of Indigenous Peoples, but more importantly, to have them as full partners in the designation and the management of conservation areas. In some ways, Canada has been a pioneer in this. If you think about the creation of Gwaii Haanas National Park Reserve back in the 1980s on the west coast of British Columbia, that was really led by the Haida Nation. And more recently, we've seen the creation of a huge national park in the Northwest Territories [Thaidene Nëné] that, again, was driven by Indigenous Peoples. Canada has set a very ambitious target of protecting 25 per cent of our land by 2025. I'm convinced that the only way we'll achieve that target is if we put Indigenous People in the driver's seat — allow them to identify the areas that are vital for conservation and then empower them to become stewards of those areas through their protection and sustainable use.

We're at a point in human history where, if we look at the global environmental emergency — biodiversity loss, climate change, toxic pollution — an ecological education is just as important as reading, writing and arithmetic. It’s critically important for children to understand how completely dependent our lives are on a healthy biosphere. The COVID-19 pandemic meant that literally hundreds of millions of children around the world were at home, with their parents struggling to help them with their education, so UN Environment launched this Earth School initiative with TED-Ed. It's free, it's fun, and it's just full of fascinating information, so it's a great resource for children, youth, parents and teachers.

Watch: David Boyd on why Canada should recognize its citizens’ environmental rights

On his hopes for the future

There are actually a surprising number of reasons to be optimistic, and those range across the whole spectrum of environmental challenges that we face. For example, where I live on the west coast of Canada, we’re seeing incredible recovery of different species of whales, especially humpbacks, and that’s because the population is protected from commercial whaling and is beginning to bounce back. We’ve seen an incredible expansion of renewable energy worldwide. Twenty years ago, all of the solar panels in the world were producing just one gigawatt of solar energy, and the latest year-end report from the International Energy Agency showed that we're now producing over 600 gigawatts of solar energy. There's all this evidence of environmental progress, which we should be inspired by, but it’s being overwhelmed by increasing human pressure on the planet. We have to continue to address those underlying drivers of environmental damage, and we can do that through transformative changes in how we grow food, what we eat, how we produce energy, how we use energy. But unless we transform these fundamental human systems, we're not going to solve these global environmental challenges.