What can birds tell us about forest fire recovery?

The behavior of birds before and after the blaze that devastated Alberta’s Fort McMurray area in 2016 is leading to interesting insights into the rebound of boreal habitat
By Sarah Hewitt
July 5, 2021

A tiny clay-coloured sparrow flits from one scorched tree branch to another. It doesn’t see the near-invisible mist net and flies right in, trapping itself in the small holes. It struggles and entangles itself further but biologist Kenneth Foster expertly extracts the bird and gently holds it for banding. Sparrows are exactly what he expects here in the chaotic arboreal debris of a recent forest fire.

That was in July 2016, just two months after a massive forest fire swept through Fort McMurray, Alta., wiping out 2,400 homes and buildings, and almost 600,000 hectares of the surrounding boreal forest. The charred remains of trees still stood upright, the standing dead. But in the five years since, birds are giving us clues about the forest’s regrowth. 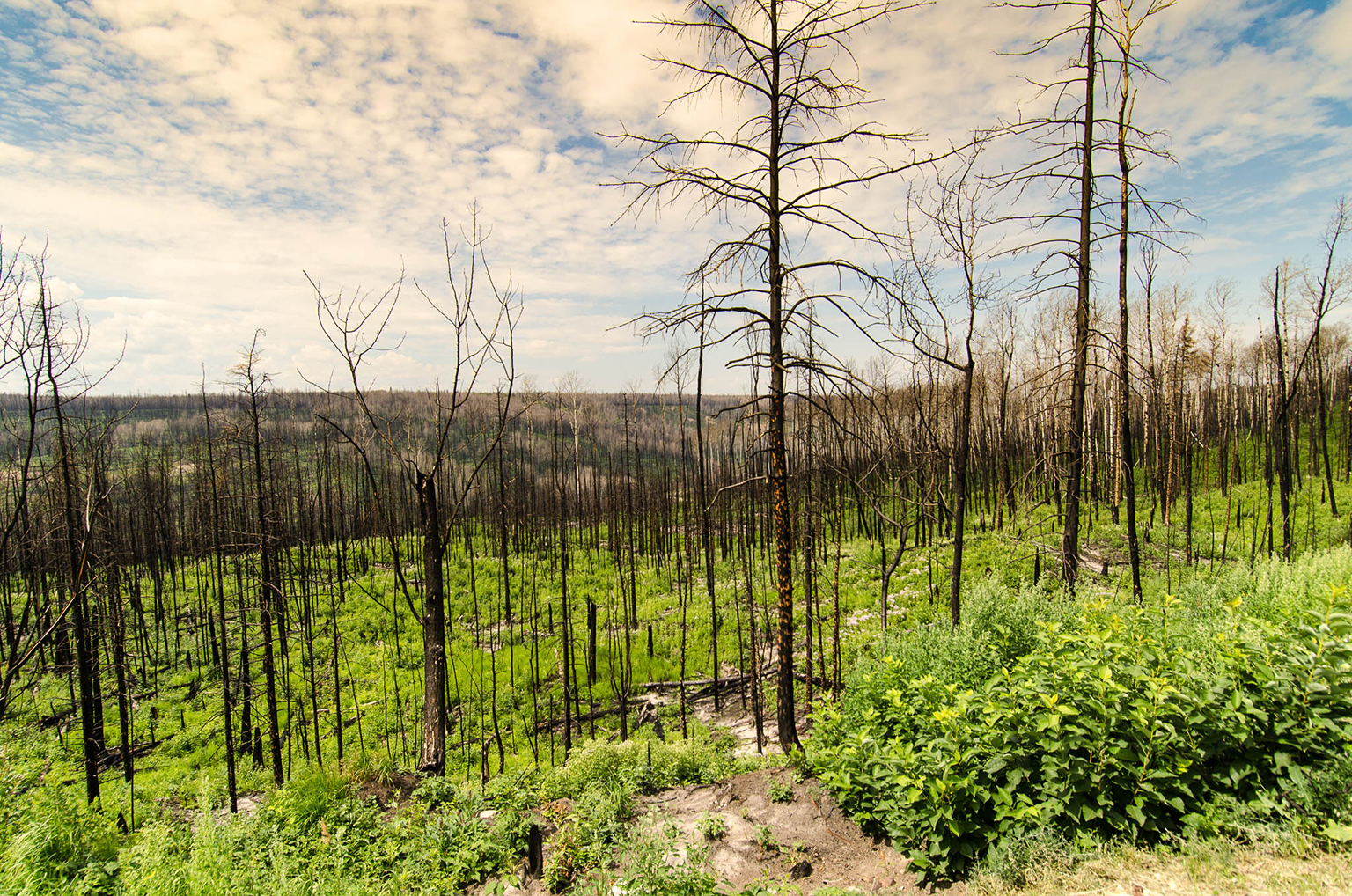 The contrast between the standing dead trees and new growth is evident two months after the fire.(Photo: Sarah Hewitt)

Foster and Christine Godwin of Owl Moon Environmental have monitored birds in the Fort McMurray area for a decade, and the fire, while devastating economically and emotionally to many, provided them a rare research opportunity. Since they had data from before the fire, they’ve been able to track the forest’s recovery using birds as indicators.

“Birds respond quickly to changes in the environment because they are not long lived,” explains Godwin. “When the habitat changes, you end up with species changes occurring very quickly, and it’s that rapid response to habitat change that makes them a great indicator species.”

Each spring, the biologists set up mist nets to catch and band birds in more than 30 monitoring sites across the region. The fire destroyed some of their sites, only burnt the undergrowth in some and left others untouched.

“Two of our sites burned really hot,” says Foster, “so the regeneration there will be from the ground up.”

The boreal forest is a fire-dependent ecosystem, with fires sweeping through almost every decade, giving them various time markers to compare to. Where the fire burnt hottest in 2016, the habitat essentially reset completely.

During the past five years, the researchers and their field assistants have spent around 1,200 hours taking an avian inventory — noting which birds return and when — at each field site, observing the regrowth of trees and looking at the state of the forest understory. They’re building a trajectory that they expect the habitat recovery to follow.

Sparrows such as the clay-coloured and Lincoln species were predictably the first to move in. These pioneer species prefer early successional habitats like forest fire debris and first-year shrub and sapling growth.

“One thing we noticed,” says Foster about the months after the fire, “was that even in the areas that burnt hot, birds were transiting through — they came back to see what was there, but didn’t stick around.” But overall, the number of bird species they banded dropped significantly in the fire’s immediate aftermath.

A year later, new growth stood out vividly against the backdrop of blackened trees, and as it progressed, the dead trees fell, building up more structure at the ground level where some birds nest. “This,” predicted Foster at the time, “should help bring the birds back in a big way.” 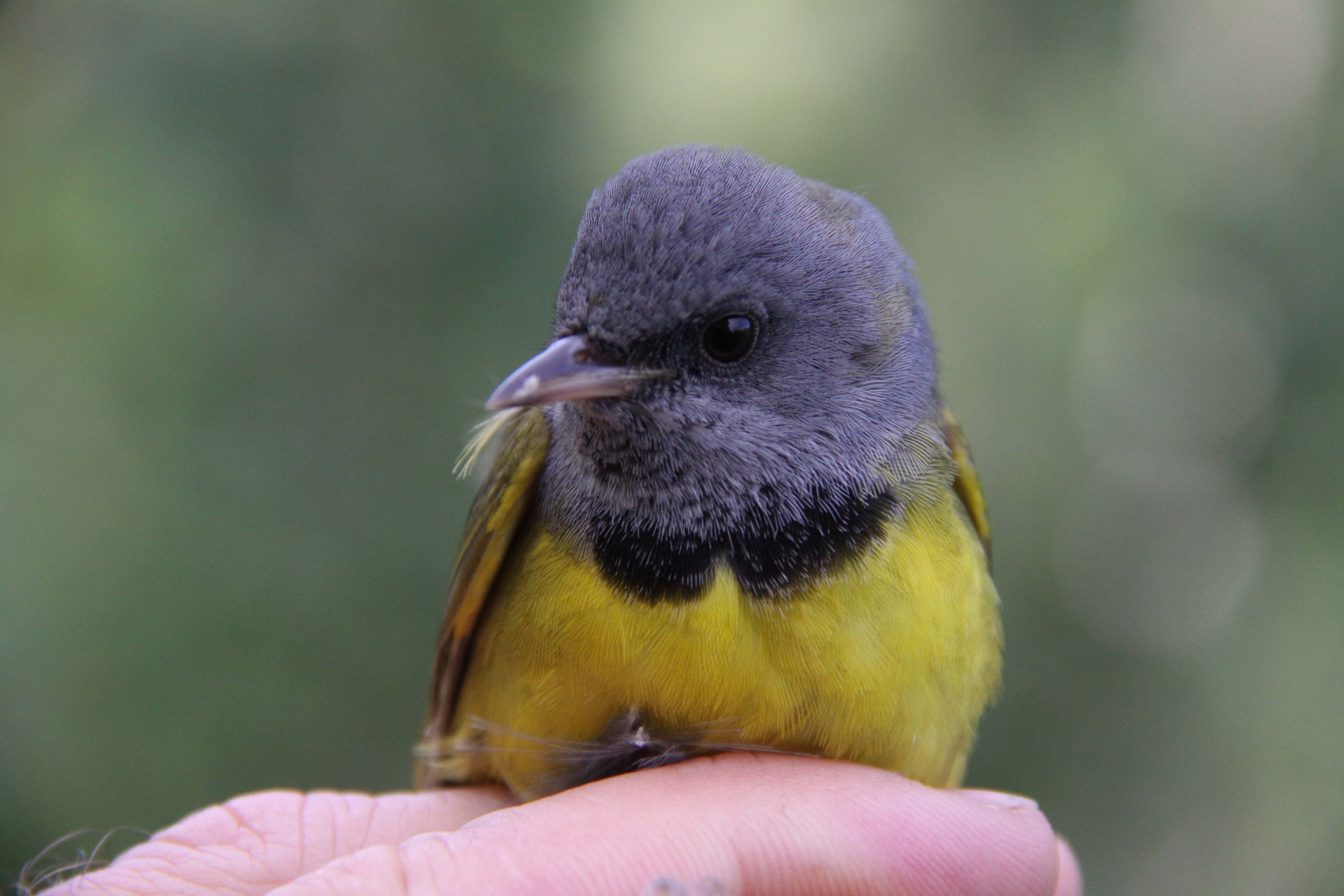 This turned out to be true. In some sites, at least. Within three years, the numbers of birds rebounded to what they were pre-fire in aspen forests, but remained lower in the slower growing coniferous forests. Tree canopies filled out, new trees, particularly aspens, grew exceptionally fast and now reach more than three metres tall. And as habitat structure improved and became more complex, wood warblers, such as the Wilson’s, mourning, and yellow warblers, returned. In fact, the warblers came back faster than expected, happily nesting in the newly regenerated aspens. Overall, the variety of bird species is a useful metric to assess habitat and recovery.

After the fire, Foster says they were surprised by the “site fidelity” of some birds — that is the desire to return to familiar nesting grounds despite the altered landscape. In the years after the fire, the biologists re-captured individuals of 14 different species, including flycatchers, thrushes, chickadees, vireos, warblers and sparrows, that they had previously banded.

“Early on after the fire, there was a lot of anxiety — will we find any birds at our sites? How different will it be?” says Godwin. “Now we go into these burn sites and get some of the best diversity in the bird catches and numbers there,” she says. “What’s happening with the birds is really cool!”

While it may take decades in this landscape for the forest to mature and attract species that prefer that habitat, such as flickers, ovenbirds and woodpeckers, future fires are inevitable and help jumpstart rejuvenation and regrowth cycles. And each time is another opportunity to observe and learn about the recovery process.